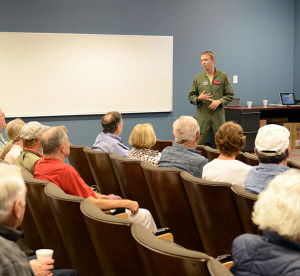 A 1967 Undergraduate Pilot Training class from Williams Air Force Base, Ariz., recently celebrated a 50-year reunion at Luke Air Force Base, by visiting the 63rd Fighter Squadron and the 310th FS.

The UPT class of German navy and air force pilots went on to complete F-104 Starfighter initial qualification training at Luke Air Force Base in a heritage-filled squadron named the Cactus Starfighter Squadron.

“We wanted to showcase the F-35 and give the group a chance to see what direction the Air Force is going with this new technology,” said Maj. Hunter Powell, 63rd Fighter Squadron F-35 Lightning II instructor pilot. “As part of their visit of the 63rd FS, I was able to give them a rundown of how we train with the F-35 and some of its capabilities. It gave them the opportunity to see the F-35 up close.”

This opportunity is a result of the partnership the CSS pilots have with both the 63rd FS and 310th FS that has lasted more than 17 years. Over 2,700 German fighter pilots were trained at Luke AFB between 1958 and 1983 in the F-84 Thunderstreak and F-104 Starfighter aircraft. These German pilots became known as the Cactus Starfighter Squadron and were deeply involved in cultural events and philanthropic activities at Luke AFB, Glendale, and within Phoenix. 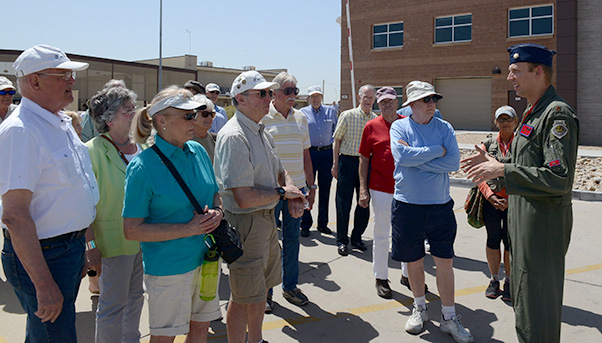 Maj. Hunter Powell, 63rd Fighter Squadron F-35 Lightning II instructor pilot, talks to the Undergraduate Pilot Training class of 1967 about how F-35 pilots train at Luke Air Force Base, Ariz. The pilots visited the 63rd FS April 12, 2017 and were briefed on what the F-35 does at Luke and how it impacts the Air Force.

“The partnership between the Cactus Starfighter Squadron and Luke Air Force Base started in 2000 with the 63rd Fighter Squadron. After the squadron deactivated in 2009, we moved from the 63rd to the 310th FS,” said retired Lt. Col. Karl Boettcher, fighter pilot. “We do events here like attend graduations, pilot naming parties, and we also celebrate a big Octoberfest where we invite the 310th FS pilots out for some German food and music.”

The 310th FS conference room houses some of the gathered memorabilia of the CSS history. It’s CSS history and Luke’s history, Boettcher said.

“Upholding the history and heritage of the CSS is important as we build the future of airpower and future fighter pilots here at Luke AFB,” Powell said. “It’s an honor to tour UPT class 67E around Luke during their 50th reunion, especially the German fighter pilots who trained here almost 50 years ago.”