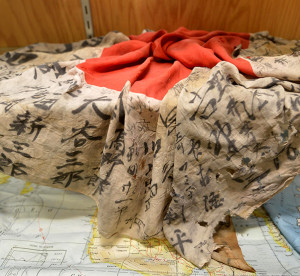 A Japanese Flag is photographed during an annual inventory for the National Museum of the Air Force March 31, 2017, at Luke Air Force Base, Ariz. The flag, commonly known as the Hinomaru, is on loan from NMUSAF. This Hinomaru appears to have been taken in battle due to what appears to be blood stains on the fabric.

Luke Air Force Base has a long legacy and tradition of honor dating back to World War I with Medal of Honor recipient 2nd Lt. Frank Luke Jr.

The mission, values and history of the 56th Fighter Wing are captured in its culture and it’s the base historian who is responsible for preserving its heritage.

In a small office in Bldg. 461, Richard Griset works on finishing up his latest, annual inventory of artifacts kept at Luke.

“To keep the artifacts is to retain our heritage and where we come from,” Griset said. “We need to know the past to know where we are going. You can ignore our past, but we are less effective if we do.”

Every year, Griset conducts an inventory of items kept at Luke on loan from the National Museum of the Air Force. The NMUSAF collects, conserves and presents the Air Force’s history to a global audience through engaging exhibits.

“I’m the custodian for 27 artifacts from the NMUSAF,” he said. “They own them and I inventory them. It used to be annually and biannual, however, they are changing the schedule to every five years.”

Many of the artifacts kept at Luke are from previous wars.

“We have a flying jacket at the 62nd Fighter Squadron that actually has the patch painted on the jacket,” Griset said. “We have survival maps from WWII, a leather oxygen mask from the 1940s and a Hungarian flying suite which looks an awful lot like our class A service dress uniform.”

One artifact Griset cares for is a Japanese battle flag.

“At the 310th FS there is a Japanese battle flag,” he said. “It’s made of silk, and it is so old that if you touch it, it bruises. It is very fragile. I hope they never ask me for it, because moving it will just destroy it.”

The flag, commonly known as the Hinomaru, was carried by Japanese soldiers into war. This Hinomaru appears to have been taken into battle due to what appears to be blood stains on the fabric.

Jan Cutrona oversees the battle flag at the 310th FS.

“It’s a part of our history that we guard and protect,” Cutrona said. “When walking visitors around the squadron, I always stop and show them our historical items and explain the delicacy of the Japanese flag.”

Artifacts are located at different fighter squadrons around base.

Griset photographed this year’s inventory and noted issues such as blemishes.

“I am not required to take photos every time,” Griset said. “I typically do, because then I have the most recent shot of any damage.”

Griset is also the custodian of the Air Force Art program.

“I’m the custodian for eight pieces now,” Griset said. “One is the picture of Frank Luke in the club ballroom, another one is “Under the Canopy”, the F-35 picture at the Academic Training Center. Another is the F-100 over the Sonoran Desert and five others in the library.

The Air Force Art Program has been at Luke for decades.

“The Air Force Art Program is a program where the Air Force contracts artist to paint paintings of various things, mostly airplanes,” Griset said. “The most recent painting is “Under the Canopy”. The one in the wing conference room, behind the commander is a copy of it. The actual painting I signed for is over in the Academic Training Center.”

Another such painting is of Frank Luke and has an interesting story attached to it.

“It was painted by his sister,” Griset said. “She painted it from a black and white picture.”

Every year, Griset rewrites Luke’s history and includes new and old facts that can be found in the 56th FW heritage pamphlet on Luke’s website.

“I update the heritage pamphlet every year,” Griset said. “I have almost 75 years of history in the wing and 57 years of history on the base, so I fill it up quick. I am currently about halfway through fiscal year 2016.”

Griset is almost done with chapter one of three. He’s estimating it will probably be around 300 to 350 pages.

“I do this every year, so it’s like doing a dissertation every year,” Griset said. “It’s a lot of work.”

Griset is excited to include previously classified information in this year’s heritage.

“I went back through the annual histories, primarily a chronology of big events, and pulled those off and edited them,” Griset said. “The fun part was going through the Vietnam stuff, because some of it is finally declassified.”

The heritage of the 56th FW is captured in its culture and its Airmen. For one historian, it’s his duty to preserve it.