Luke Air Force Base, Ariz., held its Days of Remembrance April 20, 2017, honoring the memory of the lives lost during the atrocities of the Holocaust.

In attendance was Charlotte Adelman, a child survivor during World War II in Paris, France. Adelman spoke with the men and women of Luke and shared her story of survival.

Adelman was born in 1932 and grew up in Paris with her father, mother and brother. In 1939, Adelman’s father fought with the French Army against Germany. By 1940 France had lost and the Germans began to move into Paris. Jews were required to wear the Star of David on their clothing and had the name “Jew” stamped in red on their identification paperwork.

One morning, Adelman, looked out her window and saw people being loaded into trucks.

“Oh papa, look, they are taking people on the trucks,” said 10-year-old Adelman.

The Nazis came for her parents and had them on a truck for deportation. “My father foresaw many things,” said Adelman. “But, unfortunately, he didn’t see this.”

Her father tried to convince her mother to jump but she wouldn’t. Her father jumped from the truck and fled while her mother stayed aboard. 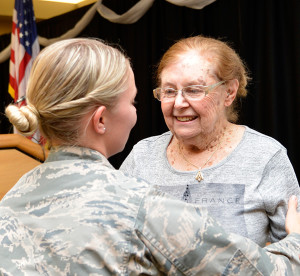 Charlotte Adelman meets with Airmen during the Days of Remembrance April 20, 2017. Honoring the memory of the lives lost during the atrocities of the Holocaust, Adelman shared her story of survival as a child during the Holocaust.

Her mother was taken to Auschwitz in 1942.

“Unfortunately, my mother went, and never came back. She was 32 years old,” Adelman said.

Adelman and her brother had been sent to an orphanage when her parents were taken. Her brother contracted scarlet fever and was taken to a hospital and Adelman was adopted by a woman working for the Germans who fed her just an apple and a piece of bread a day.

She wouldn’t wash her and told her she would be going to a castle one day. She learned from the building janitor she would be exchanged for money and taken to a camp. The janitor arranged for her to be picked up by Madame Elazare, a friend of her mother, before the exchange could happen.

“My skin was all black from not washing and my hair was long and filled with lice,” said Adelman. “Madame Elazare cleaned me up and took my picture.”

After some time with Madame Elazare, her father sent someone to retrieve her. She hid in the back of a noodle truck and traveled east of France.

Madame Quatreville took Adelman in while her father worked for the Germans. She owned a little farm which also stood as the village’s post office. She received communications between the Germans and found out they were in transit to detain and deport all the Jews in that village.

“My father was working for the Germans and they told him whoever worked wouldn’t be deported,” Adelman said. “That was a scheme which we found out about afterwards.”

The Nazis came for Adelman’s father and others. Adelman and her father ran into the woods to hide, but the Germans knew about the escape and sent German shepherds to hunt them down.

“My father was carrying me and the dogs were coming so fast, he threw me into a hole and told a woman living near the edge of the woods where I was and he went and hid in the underground,” said Adelman. “The woman came and picked me up and told me she couldn’t keep me because the Germans would find me, so she stuck me in a wheelbarrow, covered me and she ran away back toward Madame Quatreville.” 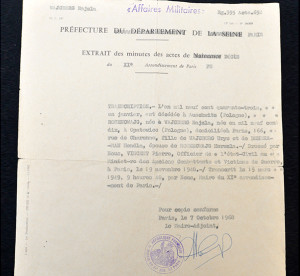 Charlotte Adelman received this document from officials at the Auschwitz Concentration Camp informing her of her mother’s death in 1943.

She hid Adelman in a cellar located between two homes on the farm and it was here that Adelman would hide for nine months with a mattress on the floor, a bucket for waste, a bucket to wash and a lamp.

“One day I said to them for one night I want to be normal, I cannot stay down there,” Adelman said. “So one night they made me come up and unfortunately that night, the Germans came and looked at the home.”

Adelman, assisted by a man in the home, tried to escape out the back of the home. He dropped Adelman when the Germans called his name. It was so dark in the room they couldn’t see Adelman and she managed to get under the bed and flatten herself as much as she could.

The Nazis came within inches of Adelman’s face with a bayonet. She wanted to scream, but she remained quiet because if she were found the whole family would have been killed. One of little boys living in the house started to point to the bed but the grandmother picked him up saying it was time for his bath and put a bar of soap in his mouth.

Adelman sat in the cellar until the end of the war. She dreamt of her mother and her future and hoped to have a home, husband, children and a little red car.

In 1945, when the American soldiers came, she was brought out of the cellar and the village people couldn’t believe she was alive.

“If it wasn’t for the uniform, the American uniform, I wouldn’t be alive today and I am very proud of all of you,” Adelman said.

Adelman was reunited with her father and after searching, found her brother. Her mother was killed at Auschwitz in 1943.

“What made me stay alive was my love for my mother. I wanted to see her and that is what kept me alive.” said Adelman. “My message is love your family. You have only one family, respect each other and be positive in life.”

This book has the word “Jew” written more than 4,000 times on each page. Within the entirety of the book, the word “Jew” is written more than 6 million times to give an idea of the magnitude of lives lost during the Holocaust. The book was used during the 56th Fighter Wing’s Days of Remembrance April 20, 2017, at Luke Air Force Base. The book was provided by Rabbi Michael Beyo.