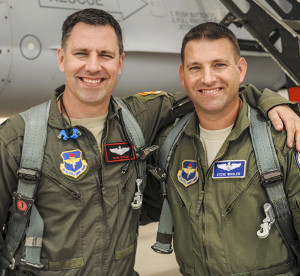 The Whisler brothers, Lt. Col. Mark Whisler, 21st Fighter Squadron director of operations, and Lt. Col. Steve Whisler, Air Education and Training Command evaluator pilot, pose for a photo before flying for the first time together in their Air Force careers April 24, 2017, at Luke Air Force Base, Ariz. The brothers have been flying the F-16 Fighting Falcons for almost 20 years combined, but had never taken to the skies as a team.

Airmen in the Air Force often times have family members who serve alongside them, but seldom does a brotherhood directly contribute to the same mission.

For the Whisler brothers, they were reunited and had the opportunity to fly and train together April 24, 2017, at Luke Air Force Base, Ariz.

“Anytime I get to fly is awesome,” Mark said. “To be able to share the comradery and brotherhood with my actual sibling, makes the experience even better.”

The Whisler brothers grew up in Montana and commissioned through Montana State University. Steve, who is almost three years older than Mark, set a path for his younger brother to follow throughout his Air Force career. Every base which Steve has been assigned, Mark has immediately followed upon his departure.

“From being chosen to fly the F-16 and every operational assignment after, Mark has been following in my footsteps since the beginning,” Steve said. “It is always refreshing to compare our experiences and what we have both accomplished at the places we have been stationed.”

Although they have been flying F-16s for almost 20 years combined, the opportunity presented to them at Luke was their first time to fly together.

“Both of us have gone through Luke to learn how to fly the F-16, and both of us have gone off to be combat pilots at locations around the globe,” Mark said. “To be back here flying F-16s in the same location with one another is awesome. This is a picture of the product of training coming full circle at Luke. I am honored to be a part of the mission at Luke.”

Prior to his current assignment, Steve was stationed at Luke ensuing various positions during the arrival of the F-35 Lightning II. During his current visit back, Steve was able to lodge and relax with his younger brother and his family.

“It is awesome to have my brother stay at my house and visit with my wife and kid while he is here on duty,” Mark said.

Despite the distance between them, the Whisler brothers continue looking for opportunities to cross paths.

“Having been stationed on opposite sides of the world for deployments and assignments, our interaction is limited and you can feel the absence sometimes,” Steve said. “The thing about the Air Force is that everyone is like your family member. That helps fill the gap.”

Although the current future for the brothers is unknown, they will continue to follow in each other’s footsteps and share their experiences of brotherhood along the way.