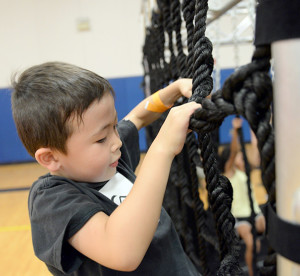 April is the month of the military child and a time to recognize and celebrate children throughout Luke Air Force Base, Ariz.

Throughout the month, the CDC at Luke took time to give back to military children with several events on base.

“We had a parade which was the big event on April 5th,” said Diane Robinson, 56th FSS CDC education technician. “We had a brownie social, pizza day and an Earth Day celebration where we planted seeds in the preschool garden. We had fun days like Purple Up day and Crazy Hair day. We are going to have a field day this Friday where the children will be on the playground most of the day.”

“I have worked with both non-military families, and military families and one big difference I see between the two, the impact it has on the child is when parents deploy,” said Suzie Mihalaki, 56th Force Support Squadron Child Development Center education technician. “Moving around also plays a big part. When I worked with non-military families, I had the child until they were ready to go to school and now, being a part of the CDC and teaching military children there is a constant change and influx of students.”

Children serve too and prioritizing their development and growth and celebrating them are extremely important. This month is a time to recognize the sacrifices they’ve made as a result of their parents’ service.