An upbringing of physical and emotional abuse, drug filled streets and foster care are what one Luke Thunderbolt encountered that lead to a decision to change his life for the better.

Master Sgt. David Hicks, 56th Security Forces Squadron NCO in charge of standards and evaluations at Luke Air Force Base, Ariz., decision to join the Air Force was a pivotal point. Despite the hardships he has endured throughout his life, Hicks learned it is important to value people first and keep a positive approach to life.

“Having to take care of people is what I have been doing for a long time,” Hicks said. “I had to do it when I was not in the Air Force, and I really enjoy it. Taking care of Airmen and seeing people progress is what I have learned to value.”

Hicks is the oldest of five sisters and two brothers. With no father figure in the household, his mother was forced to work two jobs to support the family, leaving Hicks to take care of the home.

“In my hometown of Camden, New Jersey, there was never a day where I could slack off or not have a job,” Hicks recalls. “Working two jobs was tough for a single Mom. I had to grow up fast. Seeing my Mom work as hard as she did to provide affected me. It gave me the confidence to pursue my goals and taught me that if there was something I wanted in life, I just had to go out and do it.”

During his childhood, Hicks’ mother became involved in a relationship with a man who would become his step-father. Hicks explained that despite finally having a male figure in the household, things took a turn for the worse. 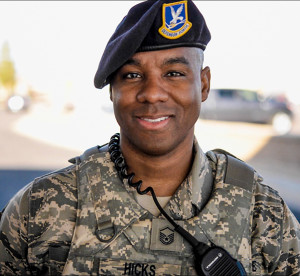 Master Sgt. David Hicks, 56th Security Forces Squadron NCO in charge of standards and evaluations, poses for a portrait April 18, 2017, at Luke Air Force Base, Ariz. Hicks has a passion for helping people and his current role with the 56 SFS gives him the opportunity to impact Air Force culture, help Airmen and push them towards their goals.

“I remember getting hit with broken-arm chairs with nails still in them and make-shift whips,” Hicks said. “I remember waking up at 2 a.m. every day to wash walls and getting punished if they were still dirty. I had to have my head on a swivel. Being physically and emotionally abused put us in foster care for almost two years. However, my mom was persistent and worked through the system to bring us back home.”

The financial burden became even harder for Hicks and his family. During this time, Hicks chose to spend a night out on the streets to see what opportunities there were to make money for his family.

“I went out and experienced the death on the streets,” Hicks said. “I observed people doing drugs and being kicked around and abused looking for their next fix. These people had no future. I decided this wasn’t the life I desperately sought for my family and went to see an Air Force recruiter the next day.”

Hicks defines this time in his childhood as a turning point.

“My decision to join the Air Force was more survival than anything,” Hicks explains. “I had to make the decision to either stay mediocre and not have a real purpose, or crossover and do something that I know is honorable. Here I am in my Air Force career 16 years later.” 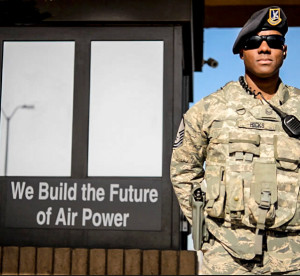 Master Sgt. David Hicks, 56th Security Forces Squadron NCO in charge of standards and evaluations, stands post at a gate during his shift April 18, 2017, at Luke Air Force Base, Ariz. Hicks endured an upbringing of physical and emotional abuse, drug filled streets and foster care which encouraged him to change his life and join the Air Force.

Hicks’ current role with the 56 SFS gives him the opportunity to impact Air Force culture, help Airmen and push them towards their goals.

“Going through everything in my life, my message is not my own,” Hicks said. “I now have the knowledge as an Airman, husband and father to know that life moments, good or bad, built me into the man I am today, and I need to share that.”

Hicks encourages all Airmen to share their testimonies of tribulation to inspire others who might be in the same situation and utilize everything the Air Force can provide.

“Take advantage of everything that Luke Air Force Base and the Air Force has to offer,” Hicks said. “You have an opportunity right now to paint your life however you want to paint it and to actually build something that you and your family can be proud of. Do not let anyone or anything keep you from accomplishing your dreams.”