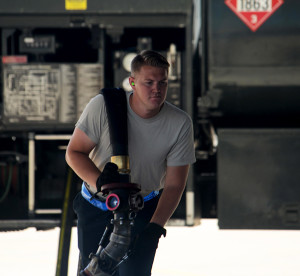 Jet fuel is the life blood of Air Force aircraft. It directly impacts sortie generation and without it, accomplishing missions would be impossible.

“Our fuels management shop primarily revolves around servicing the F-35 Lightning II and F-16 Fighting Falcon,” said Tech. Sgt. Mathew Gavin, 56th LRS fuels distribution NCO in charge of. “Over 50 percent of assigned personnel work in the fuels distribution element which is responsible for using our assigned refueling units to refuel the aircraft.”

Each aircraft receives various fuel quantities depending on mission, fuel tank configuration, and other factors. On average, the F-16 Fighting Falcon typically takes around 1,000 gallons of fuel while the F-35 Lightning II receives around 2,000 gallons.

Fuels Airmen inspect all fuel before transporting and feeding it into aircraft.

“We use commercial grade Jet A fuel with military additives,” Gavin said. “Our laboratory takes samples and analyzes this fuel routinely to ensure that it is clean, dry, and on-specification.”

With the help of technology, Fuels Airmen are able to efficiently keep track of all fuel production.

“We use the Fuels Manager Defense, which is a computer database used to manage petroleum operations,” Gavin said. “We use this to coordinate all flightline refueling activity and billing of aircraft fuel servicing. Additionally, it’s used to account for inventory, track operator qualification and training and laboratory testing schedules and results.”

Although technology and equipment play an important role in achieving success in Luke’s mission, it’s the innovative minds of Airmen who work together who make the key difference.

“We could have the best weapons, equipment and technology in the world, but none of it would run without the Airmen behind it putting in the effort to get the job done,” said Senior Airman Enrique Marquez, 56th LRS preventative maintenance team leader.

The Fuels flight understands the value of relationship in regards to the mission.

“Fuels has always been a family,” Gavin said. “I think that plays a big part in the way the Fuels flight comes together to accomplish the mission.”