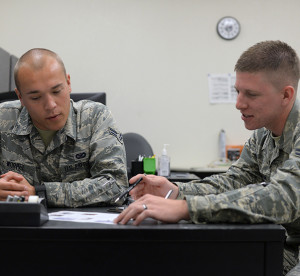 The 44th Annual Air Force Assistance Fund campaign kicked off April 10 as unit representatives at Luke Air Force Base, Ariz., and Air Force bases worldwide raise money to support charities that assist Airmen in need. The theme is ‘A Commitment to Caring.’

The Air Force Villages Charitable Foundation provides needed care in a safe, comfortable environment where widows are secure in their future surrounded by friends in a home they can’t provide for themselves.

The Air Force Enlisted Village provides surviving spouses the financial means for a safe home with their peers.

Active-duty personnel will receive an information pamphlet and a Form 2561. Donations can be in the form of cash or direct payroll deductions, in which smaller amounts are taken out each month.

Team Luke has a goal of raising $50,000 toward the overall Air Force goal of $6.78 million dollars by the end of 2017.
“Chief Kwiatkowski and I hope that everybody gives serious consideration to giving to these four worthy charities,” said Brig. Gen. Brook Leonard, 56th Fighter Wing commander. “Just a few dollars a month from your paycheck will ensure your fellow Airmen will have the assistance they need when they need it the most.”