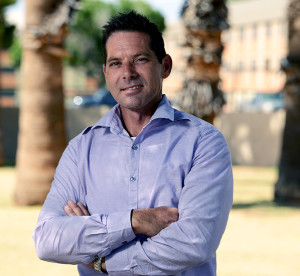 Jeffery Schone, 56th Civil Engineer Squadron environmental engineer, poses for a portrait May 15, 2017, at Luke Air Force Base, Ariz. For his continual dedication to the Department of Defense mission and integrated support of sustainability initiatives, Schone recently received the 2017 Secretary of Defense Environmental Award.

Managing resources for the Air Force’s largest fighter wing is no small task. It requires dedicated leaders to continuously provide better ways of managing and reducing the amount of waste materials used while being open to new ideas toward improvement.

One of these distinguished leaders is Jeffery Schone, an environmental engineer assigned to the 56th Civil Engineering Squadron at Luke Air Force Base, Ariz., who received the 2017 Secretary of Defense Environmental Award for his outstanding achievements throughout his career.

Schone manages multiple environmental sustainability programs at Luke AFB, and has provided over 17 years of service to the Department of Defense mission. He has managed and developed every facet of environmental compliance programs, pioneering pollution prevention initiatives and managing large scale remediation programs and construction projects for the Air Force, Navy, and Army.

One of Schone’s most notable accomplishments was in January of 2016. He proactively established the first Base Exchange Electronic Recycling Program for non-approved vendor returns, which resulted in a 44,000 pound direct landfill diversion to date.

Thinking back over the years, Schone reflects on his passion for the job.

“I knew in high school that I wanted to be an environmental engineer,” Schone said. “I didn’t know where it would lead me, but I knew within the first month of my career in the Air Force I was exactly where I needed to be. I’m thankful for all I’ve been able to do, experience, see, and support.”

Throughout his time at Luke, Schone has experienced change.

“From the F-16 to the new F-35 mission, I’ve been exposed to new things and learned from them,” Schone said. “That’s also given me the opportunity to be creative, experiment, and together support one of the greatest missions of building the future of airpower.”

Oscar Mabry, chief of materials management for Luke AFB, has worked alongside Schone for the past 15 years and describes some his greatest attributes.

“I’ve seen Mr. Schone mature over the years,” Mabry said. “He is constantly improving and looking for ways to do things better, and that makes everyone around him stronger. “He has the ability to connect and communicate and that has helped Luke’s partnership with outreach programs expanding across the valley.”

Scone attributes his successes to not only Luke, but everyone who put in the effort to help sustain the mission.

“In reality, receiving this award is a win for everyone here at Luke, the Air Force, our partners, and all the folks that make the mission stand,” Schone said.

Schone continues to shape the future for not only Luke AFB but also the DOD.

“You have to constantly put in the effort,” Mabry said. “That’s exactly what Schone continues to do.”