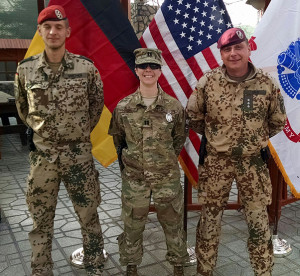 With German Armed Forces officers on either side, Air Force Research Laboratory Airman Capt. Samantha Howard is shown wearing the German Armed Forces Proficiency Badge that she recently received while deployed in Afghanistan. The badge is one of a small number of foreign badges that U.S. military members may wear.

An Air Force Research Laboratory Space Vehicles Directorate physicist at Kirtland Air Force Base, N.M., considers herself lucky to have experienced a recent deployment to Afghanistan, where she earned a German badge for military skills.

“I arrived in country as a fish out of water, having never been in an operational environment before,” Capt. Samantha “Sam” Howard said. “I had to learn how to navigate various cultural differences, coordinate disparate resources, prioritize and act quickly on emergent requests, and communicate clearly.”

Howard worked with the Afghan National Army and Police in a unique position in which she trained and advised Afghan liaison officers and managed activities for the Resolute Support Headquarters Combined Joint Operations Center. Her team spanned all services except the Coast Guard and included many nationalities.

Qualifying for the coveted badge involves a commander’s evaluation, completion of a first-aid course, a test of donning mission-oriented protective posture gear, a marksmanship test, a ruck march, a 100-meter swim in military uniform and a basic fitness test that involved 11 10-meter sprints, a flexed arm hang and a 1-kilometer run.

“Going through the events gave me a small view into what Germany, one of our partner nations, considers important in a military member,” she said. “It’s interesting to see the different skills that services and nations prioritize. For instance, while I backpack for fun, I’d never done a ruck march.

“Additionally, the inclusion of hands-on first-aid training and marksmanship indicates the desire for well-rounded individuals, not just PT stars. The event with the highest failure rate, and that I found most difficult, was the 100-meter swim wearing uniform blouse and pants. I beat the maximum time by only a few seconds despite training for it.”

Howard recalled a real feeling of camaraderie during the competition.

“All the competitors supported each other throughout the several days to earn the badge, cheering and encouraging folks on through tough events, even when most of us didn’t know the others just a day or two before,” she said.

The New Hampshire native grew up in Phoenix, Ariz., as the only child of two nerds, she says with love. Howard danced ballet growing up and attended a performing arts school.

But she always loved science. Her interests in serving her country and science led to an appointment to the U.S. Air Force Academy, where she earned a bachelor’s of science in physics followed by a master’s degree in applied physics from the Air Force Institute of Technology.

“I knew I wanted to be a scientist, but also serve my country. While both the Navy and Air Force have physicists, only the Air Force has such a large focus on space, which especially captivates me,” she said. “I appreciate that I can be directly involved in improving the Air Force’s ability to protect the United States, especially with the renewed focus on our space capabilities.”

Howard arrived home from her deployment the first week of May.

“I look forward to bringing my operational experience and perspective back to the lab,” she said.