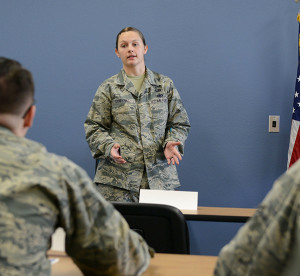 Airmen at Luke Air Force Base, Ariz., now have an opportunity to participate in an Airman Professional Enhancement Course to develop their leadership, as well as followership skills.

Those with the rank of Senior Airman and Airman 1st Class with at least 28 months time in service can participate in the AMNPEC.

“I would encourage having an AMNPEC at bases that don’t have one,” Layman said. “Having an AMNPEC gives Airmen another development opportunity as we try to prepare them for eventual NCO responsibilities.”

According to Layman, FTAC held its first AMNPEC in March and anticipates holding one each quarter.

One Airman shares his thoughts on the course.

“It’s all about what you take from it,” said Senior Airman Kevin Dawson, 56th Comptroller Squadron financial services technician. “I’m learning about being a follower and a leader. Even if you have gone through Airman Leadership School it’s a nice reboot, refresher and a great way to develop Airmen further.”