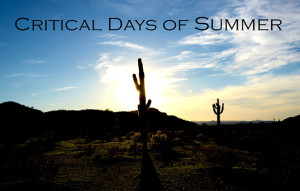 With summer approaching and temperatures on the rise, more people are active, traveling, and participating in various outdoor activities. Due to the increase in safety concerns that comes with this time, it has been named the ‘Critical Days of Summer’, and it starts on Memorial Day and ends on Labor Day.

With summer approaching and temperatures on the rise, more people are active, traveling, and participating in various outdoor activities.

Due to the increase in safety concerns that comes with this time, it has been named the ‘Critical Days of Summer’, and it starts on Memorial Day and ends on Labor Day.

At Luke Air Force Base, Ariz., the 56th Fighter Wing’s occupational safety manager, Ben Bruce, also known as ‘the safety dude,’ informs Thunderbolts of common safety hazards and provides tips on how you can reduce the risk involved with these hazards.

“There are three areas of safety we’re initially concerned about here at Luke,” Bruce said. “One is vehicle safety – this includes two-wheeled or four-wheeled vehicles. The second one is swimming – either at a pool, at home or white-water rafting. The last one is physical fitness – whether it’s getting ready for your fitness test or working outdoors.”

With transportation being one of Luke’s biggest safety concerns, Bruce encourages four-wheeled drivers to buckle up, and for motorcyclists to wear a helmet. He also encourages Airmen to pay attention when driving with minimal distractions.

“Try and reduce the tendency to be distracted while you’re operating a vehicle,” Bruce said. “This risk seems very high and dangerous here at Luke as well as the Phoenix area. The intersections here in Phoenix are the most dangerous that I’ve seen in a long time, and we’re still the number one city in America for red light running and intersection collisions.”

Despite the dry desert climate of Phoenix, water safety is also a primary concern.

“Another area of high safety concern in the valley is swimming,” Bruce said. Whether swimming in a public or private pool, make sure it is adequately barricaded so children do not inadvertently get in. We have a lot of kids drown due to lack of parent supervision.”

Bruce encourages all Airmen, despite your age, to learn how to swim but also wear a life vest.

The 56th Force Support Squadron offers private and group swim lessons at the Silver Wings pool for most ages.

“With the temperature reaching over 110 degrees, it’s important for all of our Airmen to stay hydrated,” Bruce said. “When it comes to dehydration, two things end up causing the problem. You’re either not drinking enough fluid or you’re drinking the wrong fluid.”

According to Bruce, the most common fluid Airmen choose to drink instead of water are energy drinks.

“We have about three physical fitness related incidents happen per week on our track,” Bruce said. “When we go back to the origin of the problem, it stems back to trying to hydrate with an energy drink prior to taking a fitness test.”

With these safety tips in mind, Bruce explains the reasoning behind the importance of Critical Days of Summer.

“The main idea behind the Critical Days of Summer is we don’t want to create risk, adverse Airmen, because we know life is full of risk,” Bruce said. “We want to create Airmen who know how to manage and reduce risk, so they can remain fit to fight.”