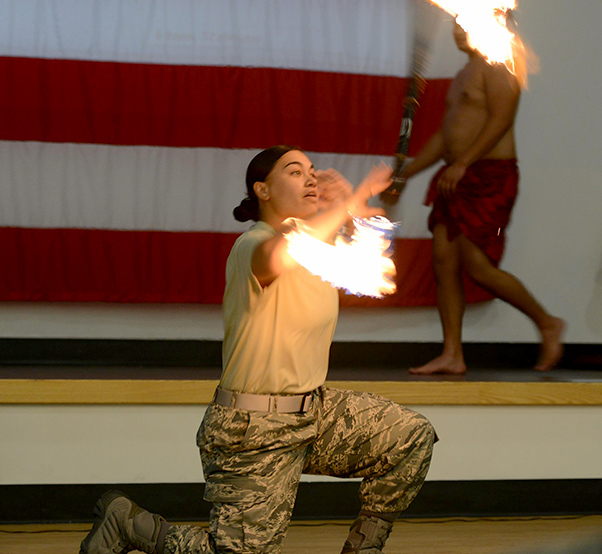 Asian-American, Pacific Islander Heritage month came to an end with a luncheon featuring dancing, food and guest speakers sharing their experiences May 31, 2017, at the Naval Operations Support Center at Luke Air Force Base, Ariz.

“This month is about getting everyone together to share their heritage and to teach others what their heritage is,” said Tech. Sgt. Beverly Lawrence, 56th Logistics Readiness Squadron vehicle operations NCO in charge.

The luncheon included several Airmen performing dances from a variety of Asian American and Pacific Islander cultures to display some of the differences.

“It’s important for us to know and understand what AAPIH encompasses because we have brothers and sisters wearing the Air Force uniform,” Lawrence said. “The Air Force is so diverse and there is so much we can learn from each other. It’s good to share knowledge on your culture with everyone. It’s more or less about awareness and being able to learn a different culture. I feel that for Airmen coming to events like this spreads positivity. You don’t have to be Asian American or Pacific Islander to get involved with this committee, anyone can contribute.”

This year’s theme was “Unite our voices by speaking together.” One Airman explains why this is important.

“There are many ethnicities when it come to the Asian-American heritage including pacific islanders, Samoans, Hawaiians and more,” said Tech. Sgt. Richard Galero, 56th Force Support Squadron base honor guard NCO in charge. “This event is the culmination of all we’ve done this month. Being able to share our culture and experiences with Airmen makes us a better Air Force.”