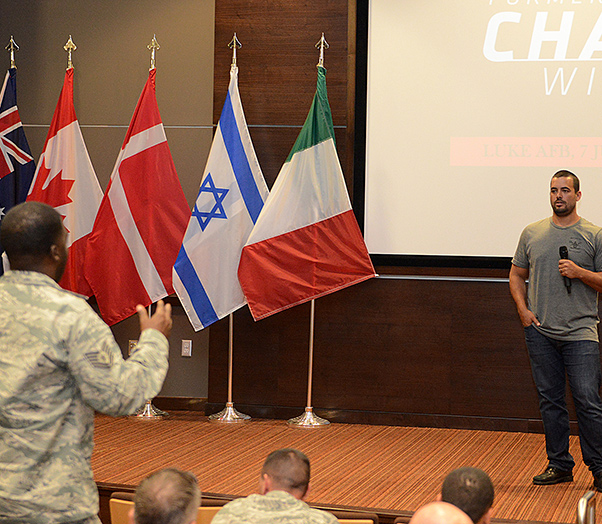 Military personnel face challenges not many in society experience from deployments to being separated from family, and more.

“Under Comprehensive Airman Fitness, the spiritual pillar is one of the four main pillars,” said Maj. David Barns, 56th Fighter Wing deputy wing chaplain. “This event allows us to reach out to the base populace to help with resilience and leadership. One of our beliefs is we work best in teams and we also work with a campaign mindset which is exactly what SEALs do. I figured it would be a great way for us to look at leadership and dealing with obstacles, whether it be at work or obstacles of life as Williams spoke about.”

Williams was with SEAL teams one and seven during his time in the Navy from 2004 to 2010. Over the course of that time he learned a lot about leadership and overcoming obstacles. 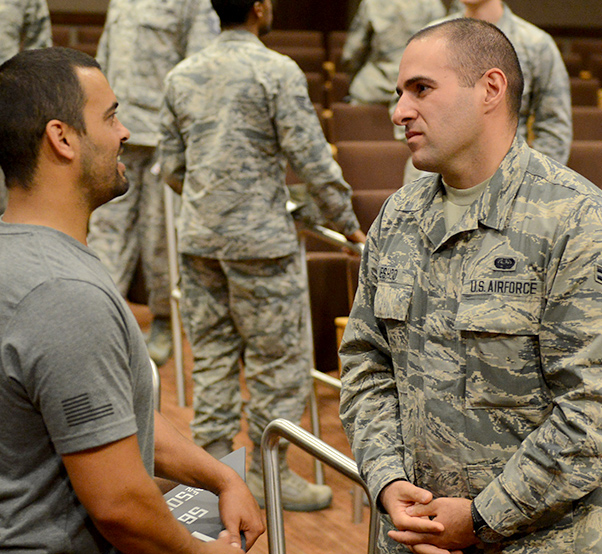 Former Navy SEAL Chad Williams, talks with Airman 1st Class Makarios Eshoo, 56th Communications Squadron network infrastructure technician, after his speech June 7, 2017, at Luke Air Force Base, Ariz. Williams had the opportunity to speak with Airmen about his time as a Navy SEAL and held a question and answer session afterward.

“When adversity comes your way, you don’t have a choice and you don’t get to pick and choose—it’s imminent. It’s not a matter of if, it’s a matter of when,” Williams said. “One thing you do have control over is how you respond. Are you going to let it be something that works like a weight in life and just knocks you down never to get back up? Or are you going to find a way to rise and overcome that obstacle?”

“I hope that Airmen gain some things on mental toughness, leadership, dealing with adversity and motivation,” Williams said.

The event ended with a question and answer session and Airmen were able to talk to Williams about some of their own experiences and faith.