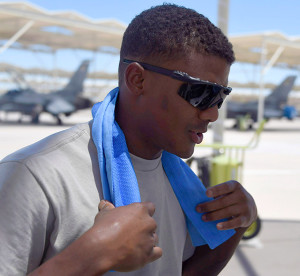 Arizona heat is nothing to joke about, especially with the temperatures rising above 100 degrees during summer. At that temperature, how do maintainers continue to operate and cope with the heat?

“You feel a big difference when you’re out there, especially if the aircraft is sitting in the sun rather than under the sunshade because that’s where you feel the heat the most,” Humphrey said. “If you have ever touched an aircraft that’s been out in the sun all day, it’s not fun.”

Along with sunshades, the maintainers are supplied other means to stay cool and hydrated.

“We just got cooling towels approved for use around their necks,” said Tech. Sgt. Martin Miller, 309th AMU section chief. “We issue them water jugs and sunscreen. We also use a work to rest ratio. The higher the temperature gets the longer the rest periods are.”

During launch and recovery of aircraft, maintainers have access to air conditioned vehicles.

“With recoveries in particular, when the temperature is 105 degrees or higher, the maintainers will stay with an expeditor in a vehicle until the jet is close to arriving,” Miller said. “The expeditors and section chiefs go out regularly to check on the Airmen. Any heavy maintenance that requires a lot of work we try to bring into the hangar to reduce the time spent in the heat.”

One of the core beliefs for the 56th Fighter Wing is we value people, ideas and then things, and the 309th AMU takes that to heart.

“Heat safety is important because the maintainers are the individuals making the mission happen,” Miller said. “They’re the ones doing the work, and if we can’t afford them the opportunities to take the breaks they need, they can’t do the mission.”