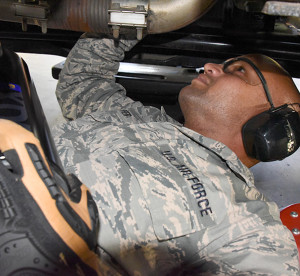 Air Force Airman 1st Class Jonathan Sheaffer replaces an engine oil filter on an R-11 refueling truck at Goldwater Air National Guard Base in Phoenix, May 3, 2017. Sheaffer is a vehicle maintenance apprentice in the Arizona Air National Guard’s 161st Air Refueling Wing. The R-11 truck holds up to 6,000 gallons of fuel and is used to refuel the wing’s KC-135 Stratotankers.

In April, Sheaffer was named Airman of the Year for the entire Arizona Air National Guard — an honor bestowed only upon the most well-rounded, high-performance junior leaders.

“The military, fire department and football organizations are very similar,” Sheaffer said. “You can put them side-by-side and they will match up. The titles may be different, but there is still an organizational chart and chain of command. You still need a certain amount of people and special tools, but the structure of it is set up the same way and someone is delegating authority, whether it’s the head coach, the wing commander or [fire department] captain.”

Tailoring leadership style
He said in each of these structures there’s a leader shaping the organization, but, in his opinion, the most effective leaders are those who can tailor their leadership style to the individual.

“Knowing people interpret situations differently, your leadership style will also affect them differently,” Sheaffer said. “Everyone’s going to have a difference in perspective and leaders should take those perspectives in consideration.”

As a football coach, Sheaffer learned firsthand the nuances of customizing leadership styles. He said some kids can be pushed hard, while yelling at others may cause them to breakdown, and then he has failed them.

Having these leadership skills helped Sheaffer when he entered Air Force basic training and was chosen as his flight’s dorm chief during the first week of training, a position he held through graduation. He said his previous experience as a leader, and as a follower, made it easier to talk and listen to his fellow airmen — urging them to do their best.

“Everyone’s background and situation isn’t the same, especially in the military,” Sheaffer said. “There are people from all over the country with diverse cultures, so the same leadership style won’t work for everyone.”

He said customizing leadership and listening to subordinates is one of the great things he has learned as a junior firefighter. Firefighters have all had the training and they all know ways to complete their tasks. However, when they are on scene of an accident, his leaders seek input from the team to come up with an incident action plan. 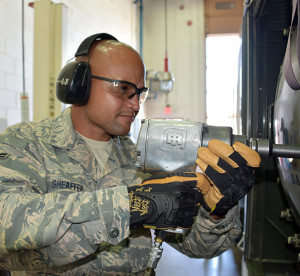 ‘Someone else may have a better plan’
“The captain will tell us, ‘Okay, we are going to do these three steps and meet these benchmarks,’” Sheaffer said. “If we don’t meet those goals we pull back and reevaluate as a team and ask, ‘Do we need to change strategies and do something else?’ I’ve learned that even if you are the guy in charge, sometimes someone else may have a better plan. You have to consider other’s perspectives even if it’s not the right way to do it or the way things need to be done. They will appreciate you having openly acknowledged their insight.”

Sheaffer said he witnessed this dynamic leadership in the vehicle maintenance shop during his first day of on-the-job training after having returned from Air Force technical school.

“We were removing the cab off one of the security forces trucks, and I was amazed at all the hands involved completing the task and how everyone’s input was valued,” he said.

“We were each assigned an area of responsibility; making sure all the lines and hoses were clear as the cab was lifted,” he added. “[The shop leaders] made it known if anyone saw something snagging or any other kind of problem, you had carte blanche to halt the removal.”

Sheaffer said his shop leaders’ example showed him they truly care about each airman.

“If a message needs to be conveyed that a behavior or a process needs to be changed, it is directed in a constructive manner,” he said. “Just like the football player, they present it in a way that I don’t internalize the message and feel criticized.

Sheaffer said he hopes as he grows in his roles as an airman and as a citizen that he can utilize the lessons he’s learned from his current and past leadership.

“I won’t have personal contact with everyone in my different roles, whether at a city, state or national level,” he said. “However, if I conduct myself in certain way, my small part in the big machine can ultimately impact everyone.