On April 27, 2011, Lt. Col. Frank Bryant Jr. was among the nine Airmen killed during a shooting incident at the Afghan Command and Control Center in the Afghanistan air force headquarters, North Kabul International Airport. He passed away from injuries sustained by gunshot wounds.

Well known by his Family and fellow pilots as “Bruiser,” Bryant was a pilot assigned to the 56th Operations Group with more than 3,000 flying hours, 121 in combat. He was also a well-known wrestler for the United States Air Force Academy team, becoming the MVP in his time there.

In attendance at the ceremony today were his widow, Janice Bryant, along with their 7-year-old son, Sean Luke. Mrs. Bryant spoke of her gratitude and appreciation for the rededication ceremony.

“It’s an honor for our family to be here during this rededication ceremony,” Mrs. Bryant said. “For me, Luke is a place where we can always come back to because it feels like home.”

Sean Luke was just a year old when his father passed away. Now, six years later, Mrs. Bryant feels as though he can truly understand how much of an impact his father made on his peers. 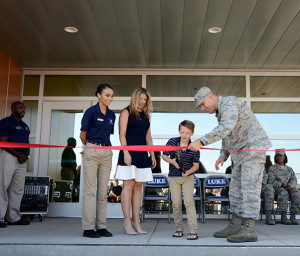 Brig. Gen. Brook Leonard, 56th Fighter Wing commander, assists 7-year-old Sean Luke, son of Frank Bryant Jr., in cutting the ribbon during Bryant Fitness Center’s Grand Opening Ceremony June 27, 2017, at Luke Air Force Base, Ariz. During the ceremony, the fitness center rededicated its name in honor of Frank Bryant Jr., an Airman who made the ultimate sacrifice for his country.

“I’m very grateful of the fact that this is somewhere my son can see a lasting tribute of his father,” Mrs. Bryant said. “He can walk into the gym and see his father’s picture and know that he was a hero.”

Also in attendance was retired Air Force Col. James McCune, commander of the 310th Fighter Squadron from 2008-2010, who worked with Bryant.
“There are three things I think about when it comes to Bruiser,” McCune said. “I think about his integrity, drive, and humor. He was a wonderful guy who made everyone around him better, and I can’t think of a better place to dedicate to him other than this gym.”

During the ceremony, Brig. Gen. Brook Leonard, 56th Fighter Wing commander, spoke about the legacy of Bryant and recalled his days of wrestling together.

“Bruiser and I first met on Stanley’s Canyon at the United States Air Force Academy on the wrestling team doing pre-season training. Bruiser was an incredible part of our wrestling team and I enjoyed watching him continue to excel over the years in the academy eventually becoming the team captain and the MVP of an incredible wrestling squad.”

Bryant’s determination for excellence serves as a reminder for Airmen who walk into the Bryant Fitness Center to strive for more.

“It’s the legacy of Frank ‘Bruiser’ Bryant Jr. that we want to remember this morning,” Leonard said. “Bruiser truly continued to develop Airmen and fighter pilots throughout his entire life. It’s awesome to be able to be a part of this rededication ceremony as we remember what happened six years ago as he gave his life in defense of this country, protecting freedom and justice worldwide. This is an incredible opportunity for us to continue forward in excellence as each and every day this fitness facility will contribute to how we build the future of air power.” 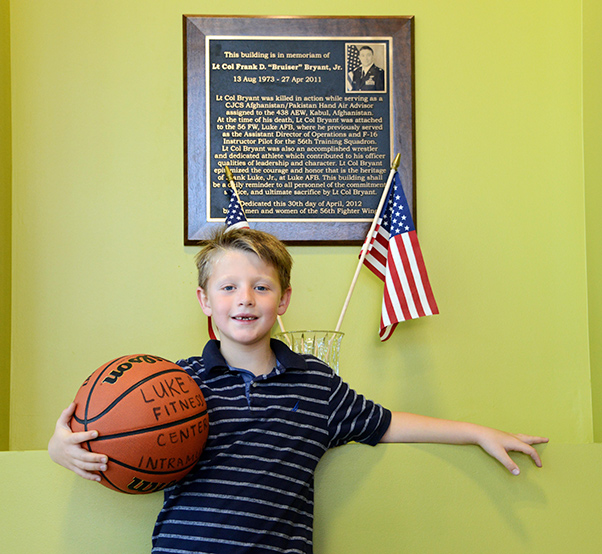 Seven-year-old Sean Luke, son of Frank Bryant Jr., poses for a picture in front of his father’s memorial plaque during Bryant Fitness Center’s Grand Opening Ceremony June 27, 2017, at Luke Air Force Base, Ariz. Luke was just two-years- old when his father was killed in action while serving in Afghanistan.