An electric, jolt of energy rushed through his veins. “Hold still, don’t move,” he screamed. A land mine had been dusted off by the impact of his team leader’s right boot. Instantly training kicked in, Knelange and his team started the procedure to safely get their fellow Airman away from the land mine and back into the vehicle.

“Those things don’t mess around,” said now Staff Sgt. Jeffrey Knelange, 56th Civil Engineer Squadron EOD training NCO at Luke Air Force Base, Ariz., as he recalled his deployment. “They are anti-personnel for a reason. I was not going to go home without my team leader.”

Like many jobs throughout the Air Force, EOD is demanding both physically and mentally. For Knelange, finding balance between work and home life is critical to his success as an Air Force professional.

“Our chaplain came around asking everyone if they’d ever played hockey,” said the 24-year-old EOD technician. “They pushed out the Luke Thunderbolts Hockey page and tryouts were a couple weeks after that. I started skating when I was four but it had been a long time since I actually got to play the sport.”

Approximately 20 people are a part of the Luke Thunderbolts Hockey team where active-duty and civilians meet in the evenings to hit the ice and enjoy the game.

“Hockey is a great way to decompress,” said Knelange. “For me, and for what seems like the rest of the team, when we do get out on that ice work goes away. We have a new job. At that point in time, it’s all for the love of the game. Whether it’s a win or a loss, everybody is in such a great mood. We’re tired, but you can definitely see everyone’s spirits uplifted.”

During practices the team can be seen doing almost exactly what they do on game day.

“A well-known saying, practice like you fight, train like you fight, playing the game is actually the best way for us to practice. So when we do practice we’ll usually do a little bit of drills and the go right into a scrimmage match.”

Knelange said practicing is how they are able to work as a team and win but, in EOD there is no such thing as not walking away with a win and being happy about it.

Though disarming an explosive device can be an extremely difficult task, being on the ice presents similar challenges. 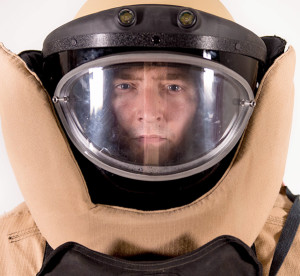 Staff Sgt. Jeffrey Knelange, 56th Civil Engineer Squadron EOD training NCO, stands in his bomb suit at Luke Air Force Base, Ariz., July 10, 2017. Knelange has learned to balance the demands of being an EOD professional while being a key component to the success of the Luke Thunderbolts Hockey team which is a vital part of his comprehensive fitness.

“As one of our younger players on our summer league team, Knelange brought his gung-ho, EOD motivation and energy every week,” said 2nd Lt. Ryan Allen, 56th Logistic Readiness Squadron installation deployment officer and hockey club president. “He is a guy you knew could count on being ready to play.”

“The hockey club here has been one of my favorite experiences at Luke,” Knelange said. “The guys that I work with, that are out there on the ice with me as well, I love those guys. We’ve grown a lot stronger over the past month and a half that we’ve been playing together.”

Knelange helped his team take third place during their past season with a record of 7-2. Just as he is a leader in his EOD flight, he plans to lace up his skates again this fall to help lead his team to another successful season.