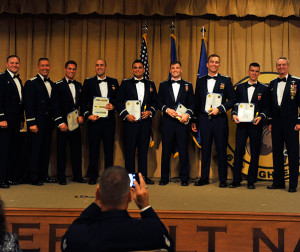 “This is a history making moment,” said Roberson. “From my perspective there will be people 20 to 30 years from now who will remember that you were in the first [F-35A Lightning II initial qualification course]. It is really important for you to know that the F-35 is the future.”

Prior to the first flight in the Lightning II, each student completes 16 simulator events and over the course of the program 46 simulator events occur. The F-35 simulator provides a highly realistic and immersive experience that prepares each pilot for their first sortie in an aircraft.

“Each student flew at least 48 sorties totaling 77 hours,” said Lt. Col. Rhett Hierlmeier, 61st FS commander. “Starting with the basics of taking off and landing, continuing across the full spectrum mission sets, and culminating in our Capstone phase of high-end employment. Along the way, our students dropped inert and live laser-guided GBU-12s, refueled from a KC-135 day and night, and flew low-altitude step-down training.”

“For B-Course graduates, you are going to be the one that everyone turns to,” said Roberson. “It won’t be long for the B-Course group to turn to you to find the answers about that airplane. You need to be the ones that step up and know the answers on a higher level. Don’t be shy, we need you to push the envelope on how to fly the F-35. We are teaching you everything we know about the F-35, you’re going to take us to another level.”

These six pilots will go down in history having completed the first eight-month F-35A Lighting II initial qualification course.

“Congratulations 17-ABL,” said Hierlmeier. “I salute you for your hard work and commitment to excellence. You have earned the title ‘F-35 fighter pilot,’ and you make us proud.” You represent the hard work of the 56th Fighter Wing and Team Luke. Continue to learn and sharpen your sword, for there will likely be a day, sooner rather than later, when you will be tested. As you move on to your operational assignments remember that you wear our brand. Stay humble, fly, fight and win! Bring it on!”