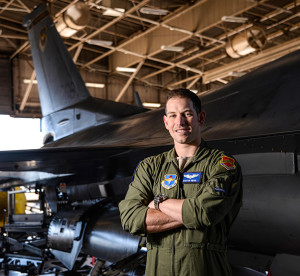 Capt. Dustin Smail, an instructor pilot in the 309th Fighter Squadron at Luke Air Force Base, Ariz., was chosen for his courage in combat as a 2017 Portraits in Courage honoree.

Honorees for this year’s “Portraits in Courage” program were recently released.

“Portraits in Courage” is a 10-year tradition that pays tribute to Airmen who have demonstrated courage in combat, in their community and while overcoming adversity.

One of the honorees, who recently relocated to Luke Air Force Base, Arizona, is Capt. Dustin Smail.

Before dawn July 3, 2016, Smail led a team of two F-16s into northern Syria near the city of Manbij to provide close air support for ground forces combating ISIS. While monitoring a suspicious, armed individual that a pair of A-10 pilots had been tracking, Smail saw rocket propelled grenades and small arms fire flashing in the night.

He found a large group of ISIS fighters converging on a friendly location attacking with machine guns, RPGs and grenades. The ground forces were outnumbered and overwhelmed by enemy fire, and unable to maneuver away from the threat. A joint terminal attack controller requested immediate support and approved a danger close attack. However, the enemy was much too close to friendly forces to strike the target with bombs. Smail decided the best course of action would be to plan night strafe attacks to force the fighters to retreat. As dawn approached and the explosions and gunfire impairing his vision, Smail was unable to visually see the ground or the target. He took off his goggles and prepared to undertake the attack with only his wingman’s mark and corrections as reference. He then began coordinating with a nearby Predator to strike the same position with a Hellfire missile. The first pass suppressed enemy fire, while the second strafe factored in his wingman’s corrections and hit the ISIS position.

While tracking the retreating enemy, Smail found 15 additional ISIS fighters, and quickly performed two airstrikes, killing several ISIS ground troops. Because of the timely actions of Smail and his wingman, friendly forces were able to escape without suffering any losses.

Portraits in Courage is an Air Force chief of staff program and each year honorees from across the Air Force are selected to represent all Airmen who have faced situations like these Airmen every day across the globe. In addition to the luncheon, honorees were spotlighted during a reception and a Heritage to Horizons Concert at the Air Force memorial in Washington, D.C.

In the 10 years since its inception, more than 167 Airmen have been honored through Portraits in Courage. The 2017 program honors 21 stories showcasing 49 courageous military and civilian Airmen.