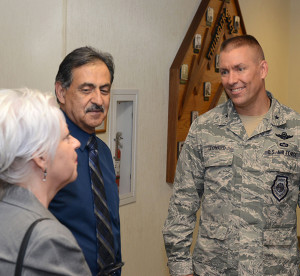 As part of a Department of Defense program launched in May 2017, Luke Air Force Base, Ariz., honored its first gold star family Aug. 18, 2017.

The Defense Biometric Identification System Card initiative allows Capt. Fresques’s parents access to Luke to reconnect with the military, receive invites to base events and have supporting resources like the Air Force Families Forever representatives at the Airman and Family Readiness Center.

The Fresques gave advice to those struggling through the loss of a family member.

“You have to remember the good memories,” said Sherry Fresques, Jeremy’s mother. “It’s been a 12 year journey for us and you start out in the darkest of spots. I think through the grace of God he gives you comfort, others are praying for you to have that comfort and you get it and slowly see the light again. After 12 years we’re in a good place.”

“If they don’t have faith then they should try and get into a group that can help them deal with their loss,” said Nick Fresques, Jeremy’s father.

The Fresques visited the base to pick up their DBIDS cards and meet Brig. Gen. Brook Leonard, Luke Air Force Base commander.

“I feel really appreciative of Luke Air Force Base for asking us to come on base and be a part of special events and functions,” said Sherry Fresques. “I’m excited to be able to be there for the service men and women because they’re really important to us. It’s nice to be around them.”