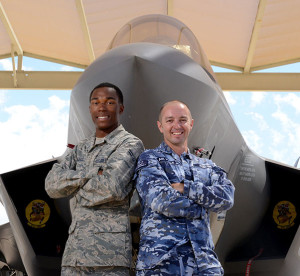 Luke Air Force Base in Arizona hosts several nations for training in both the F-35A Lightning II and F-16 Fighting Falcon. This year is the 100th year that Australia has been partnered with the United States.

“Few nations boast closer ties than the United States and Australia,” said Air Chief Marshal Mark Binskin, Australian Defense Force chief. “It’s a friendship based on the struggle for common values and ideals, forged side-by-side in every major conflict over the past century.”

Since the beginning of the 1900s, Australia has fought alongside the United States in battles and wars around the world.

“From World War I, where Australian General Sir John Monash commanded U.S. forces in the Battle of Hamel to the fierce fighting in the Pacific during World War II. On the battlefields in Korea and Vietnam to our contemporary operations in Afghanistan, Iraq and Syria – our mateship has endured and strengthened through combat and cooperation,” Binskin said.

There have been several moments and examples of this throughout the past century.

“One of the greatest examples of mateship between our two countries was when the U.S. came to Australia’s aid and joined our fight against the Japanese in World War II,” said Lt. Col. Darren Clare, 61st Aircraft Maintenance Unit Australian wing commander. “It is not well known but more Japanese bombs were dropped on northern Australia in February 1942 than on Pearl Harbor just nine weeks prior. Our country was at grave risk of invasion as the Japanese Navy worked its way down the South Pacific. With a fair proportion of Australian forces committed to the fight in Europe, if the U.S. didn’t help us out who knows what would have happened. Ever since, we’ve been there for each other and have faced common enemies side-by-side.”

Australia was the first partner nation at Luke to train on the F-35As with Luke Airmen.

“Training alongside U.S. pilots reinforces my belief that our countries have shared values and can rely on each other as true friends,” Clare said. “Training together over the decades has built close bonds, beyond just mutual understanding, and the benefits of our relationship was obvious during my three Middle East deployments and having flown alongside U.S. forces on operations.”

Luke’s mission continues to grow as more countries participate in training. Australia will continue to build the future of airpower alongside Luke Airmen.

“Even today, 65 years after our friendship was formalized with an Alliance, our relationship continues to adapt to contemporary security challenges, like the cooperation between our respective nations as we work together to introduce the fifth-generation F-35A Lightning II aircraft,” Binskin said.