Despite the thousands of miles between Arizona, Texas and Florida – Airmen assigned to the 56th Fighter Wing at Luke Air Force Base, Ariz., are directly contributing to the relief efforts of those affected by Hurricane Harvey and Irma.

A donation drive is taking place at Luke until Oct. 1 in conjunction with Saint Mary’s Food Bank Alliance to assist families in need who have been afflicted by the ongoing hurricane season.

“This drive shows that Luke Air Force Base cares about what’s going in the world,” said Senior Airman Ramon Ramirez, 56th Security Forces Squadron vehicle control officer and organizer of the drive. “We want to help out, even though we are so many miles away.”

Ramirez himself was impacted by Hurricane Harvey, he explained. His father was living in Galveston, Texas when Harvey struck. Fortunately, his father’s company was able to provide transportation for him out of the impacted zone. They are unsure of the extent of damage to their property, but have been in contact with one another to ensure his safety.

“I want the people affected by these hurricanes to know that there is someone out there who cares about them,” Ramirez said. “We have been coordinating with the commissary and individual units on base to organize donations.” 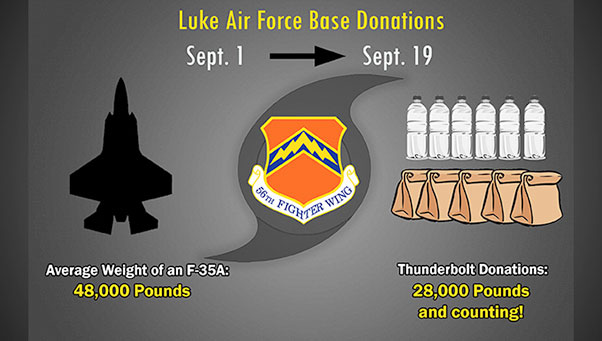 A donation drive is taking place at Luke Air Force Base, Ariz. until Oct. 1 in conjunction with Saint Mary’s Food Bank Alliance to assist families in need who have been afflicted by the ongoing hurricane season.

Multiple groups are participating in the drive by providing drop-off locations within squadrons and facilities on base. A pick-up of all the donated goods takes place each Friday.

Airmen and families who wish to donate can coordinate with their individuals units or drop off items at the commissary.

“Luke Air Force base cares,” Ramirez said. “We encourage everyone to donate something, even the smallest contribution can have a big impact.”

To date, Luke has donated a total of 28,022 pounds of items to those affected.

One of the core beliefs of the 56th Fighter Wing is valuing people first. Whether they live next door or across the country, Team Luke will continue to provide assistance to those in need.