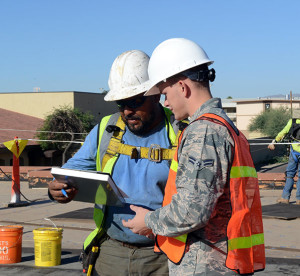 For many base agencies the end of the fiscal year doesn’t mean much, but for a few it is the most demanding time of the year.

The 56th Contracting Squadron, Civil Engineering Squadron and Comptroller Squadron at Luke Air Force Base, Ariz., work together to ensure everything is in order as one fiscal year ends Sept. 30 and the next one begins Oct. 1.

“Typically the last big push to award contracts happens at the end of August or beginning of September,” said Mrs. Mary Peetz, 56th CONS director of business operations. “It happens at the end of the fiscal year because if we don’t spend the money we have for this year we could lose it for the next year.”

The cooperation of all the units is critical to ensure the end-of-year success.

“The process starts with all organizations coming together and deciding on a combined requirements list,” said Mrs. Peetz. “That entails all squadrons and groups participating in a rack and stack of wants and needs.”

Though the Air Force employs Airmen in many types of jobs to accomplish its mission, some tasks we just can’t do.

“Contracting is important because the Air Force does not have the organic capability to fulfill all needs within the government,” said Mrs. Peetz. “Instead we leverage the knowledge and capabilities of the commercial market to sustain the needs of the government as a whole while saving tax payer dollars.”

Contracting puts together the paperwork, finance provides the money and the civil engineers facilitate the projects.

“We have a meeting once a week with the civil engineer squadron and finance, we call it the trifecta meeting,” said Mrs. Peetz. The trifecta team fosters open and honest communication about project status, funding and timelines. They also discuss and resolve pre and post award project issues.

As individual units they are strong, but when they come together as team the fiscal year is no match for these professionals.

“As business advisors at end of year, not only do we concentrate on the timeliness of obligating all of the funds that are expiring to meet our customers’ critical mission, but we also look at the long term impacts for our community, the base and the future of airpower” said Major Barbara Divine, 56th CONS commander.

“Without the relationship between CONS and CPTS, we would come to a complete work stoppage at Luke,” said Karen Hightower, 56th CPTS analysis flight chief. “We are two very unique sides to the same coin. One without the other would be useless. We’re a package deal and together we’re critical to making sure we maximize the use of taxpayer dollars while building the future of airpower.”