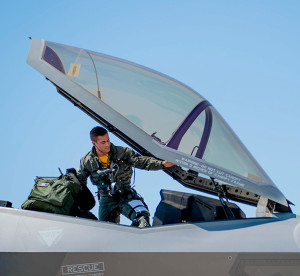 A U.S. Air Force F-35 student pilot climbs into an F-35 Lighting II at Luke Air Force Base, Ariz., July 7, 2017. Since F-35 pilot training began in 2011, the U.S. Air Force has trained and graduated 500 pilots across the joint and international enterprise.

The U.S. Air Force trained and graduated the 500th F-35 Lightning II pilot across the joint and international enterprise Sept. 19, 2017, at Eglin Air Force Base, Fla.

Maj. Chris Campbell, 461st Flight Test Squadron director of operations, is an F-16 test pilot with more than 1,000 fighter hours and 245 combat hours. He began F-35 fighter pilot training at the 33rd Fighter Wing this summer and became the 500th pilot to graduate the program.

“As a test pilot, working on the F-35 is an opportunity for me to be a real force-multiplier,” Campbell said. “Flying the F-35 has been a long-term goal of mine. I am thrilled to be part of the program and I hope to make a positive impact.”

While training as an F-35A student pilot at Eglin Air Force Base, Campbell completed approximately 200 hours of academics, 14 simulators, a high-speed taxi, and six flights in the aircraft before being deemed qualified.

The coursework takes full advantage of emerging technology by leveraging virtual reality training for pilots to compliment the military’s most advanced weapon system.

“As we discover new ways to employ the F-35 based on its expanding capabilities, we have to adapt the way we train our pilots to ensure they meet the needs of our combat air forces,” said Col. Paul D. Moga, 33rd Fighter Wing commander. “The world of fifth-gen tactics is rapidly evolving. It is changing the way we think, train and execute as a joint and multi-national force.”

Since the first aircraft was delivered in 2011, the F-35 enterprise and integrated training program have delivered more than 200 additional jets, produced more than 4,500 maintainers, and flown more than 100,000 hours.

“The F-35 and the capabilities it brings to the joint fight are key to the Air Force’s ability to dominate in any airspace,” Moga said. “The Airmen we train and graduate today are the finest in the world. Their skills, coupled with the survivability and lethality of this weapon system, will ensure continued air superiority for the U.S., our partners, and our allies for decades to come. Five hundred down, thousands to go.”

“This milestone represents the epitome of a team effort: active duty, Guard, Reserve, civilian, contractor, Air Force and Navy personnel all coming together with a common purpose to accomplish a common mission–train and graduate outstanding professionals for the combat air forces.”

Campbell plans to use his experience as a legacy test pilot to help improve the fifth-generation fighter through developmental testing on the aircraft.

“The F-35 will be the backbone of the Department of Defense’s tactical fighter fleet,” Campbell added.  “Making the product better in the developmental test phase will have a huge positive impact on the Combat Air Force in the future.”

Eglin AFB is one of two bases in Air Education and Training Command responsible for the F-35 training mission. Together, Eglin AFB and Luke AFB, Ariz., enable AETC to provide F-35 flying and maintenance training that are critical to the joint fight.