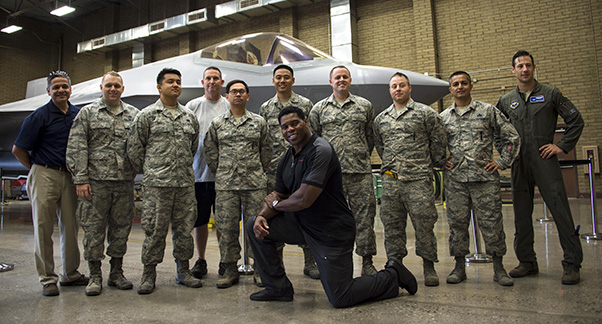 Herschel Walker, former professional athlete, takes a group photo with Airmen assigned to the 62nd Aircraft Maintenance Unit at Luke Air Force Base, Ariz., Oct. 3, 2017. During his visit, Walker went to various units around base to interact and spend one-on-one time with Airmen.

Former professional football player, bobsledder, sprinter and mixed martial artist, Herschel Walker visited Luke Air Force Base, Ariz., Oct. 4 to see the base and speak to Thunderbolts during an all-call.

During his time at Luke, Walker spoke about his life, facing adversity, how to be resilient and described some of the struggles and challenges he faced, even in the midst of great success and record setting performances, as an athlete and growing up.

“I was the kid who sat in the back of classroom and never asked questions,” Walker said. “I was made fun of for having a speech impediment and for being overweight. From fourth to eighth grade, I never went out for recess.”

Walker’s struggles continued until eighth grade at which point he realized he wanted to change.

“I decided to start working out,” Walker said. “That summer I did 5,000 push-ups and sit-ups, sat in the library in front of the mirror and started reading to myself every day.”

Walker’s hard work paid off as he graduated as the valedictorian of his class and received both academic and athletic scholarships. 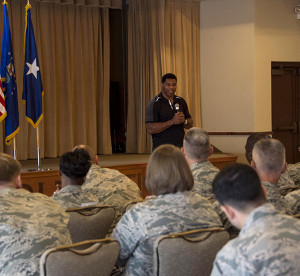 Herschel Walker, former professional athlete, speaks to Thunderbolts during his visit to Luke Air Force Base, Ariz., Oct. 3, 2017. Walker’s speech encouraged Airmen to be resilient and never give up even through life’s toughest times.

He attended the University of Georgia where in just three years he won the Heisman Trophy.

“The message I want to give Airmen is to never give up,” Walker said. “I’ve gone through some tough times in my life, but I had to keep looking up and continue to work hard. If you’re hurting or suffering don’t be afraid to ask for help.”

Walker also visited various units around base to spend one-on-one time with Airmen.

“I’m thrilled and very happy that I had the opportunity to come and thank the young men and women for what they do and the sacrifices that they make,” Walker said.

At the 56th Fighter Wing we are committed to building culture with a campaign mindset. Having positive relationships with our community and educating our Airmen through personal experiences of resiliency and adversity make a stronger force for building the future airpower.