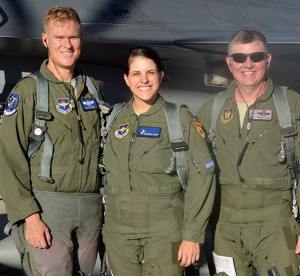 It’s common for employers to have a take your spouse or child to work day, but it’s different when your job is flying F-16s.

Maj. Alex Divine, 309th Fighter Squadron fighter pilot and training officer at Davis-Monthan Air Force Base, Ariz., as part of a commander immersion program, recently flew with his wife, Maj. Barbara Divine, 56th Contracting Squadron commander, in an F-16 with the purpose of bringing commanders from other units together to see how their jobs impact the mission.

“Our mission was to showcase to commanders across base our ability to do low-level flying and surface attacks while also exposing them to the mission,” Alex Divine said. “I was able to show her the actual impact the 56th CONS has on supporting the mission and building the future of airpower.”

Barbara Divine says her experience in an F-16 is something she’ll never forget.

“It was fantastic,” she said. “Some parts were terrifying, but overall it was an amazing opportunity. It was amazing to see the support side and everything that happens behind the scenes that goes on before heading out to the jet. Seeing that first hand will help make my team and our mission better.”

Even though 56th CONS is a small piece of the puzzle, every squadron contributes to building the future of airpower.

“The biggest thing for me is that people know how they contribute to the mission,” Divine said. “At Luke, we’re at our best when we work in teams. No matter how small or big your job is, we all have a part in producing the world’s greatest fighter pilots.”

In addition to the commander immersion program, the wing conducts an immersion program for Airmen across the wing, from maintenance to logistics, to give them a chance to see how their day to day operations support the flying mission.