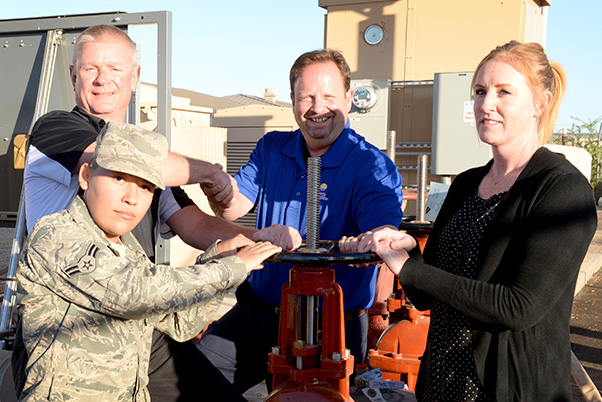 Partnership members from the 56th Civil Engineer Squadron, the 56th Contracting Squadron and Liberty Utilities celebrate the opening of a new water pump at Luke Air Force Base Ariz., Nov. 27, 2017. The new pump will provide the installation with water from off-base until a new water well is created on-base.

The 56th Fighter Wing at Luke Air Force Base, Ariz., in coordination with a local utility company, opened a new water pump on the southeast side of base today.

The water pump, nestled at the base of the south water tower, was built as a cooperative effort between the 56th Civil Engineer Squadron, the 56th Contracting Squadron, and Liberty Utilities, a local area business, to pump fresh water from local municipal supplies to the south side of the base while the wing develops new self-operated wells.

“Today is an exciting day,” said Lt. Col. Paul Fredin, 56th CES commander. “This pipeline provides a backup system where we can purchase water from off-base suppliers that is safe to drink, plentiful, and gives us the redundancy and surety that we’re always looking for.”

Luke’s aging main well was shut down about 18 months ago due to ground contamination concerns from a variety of sources including local farm runoff. While new wells are developed, Luke AFB has been purchasing and sourcing water from secondary wells in surrounding cities.

In addition to being a stopgap source for water supply, the pump will operate as a permanent backup system once the base’s new wells are developed.