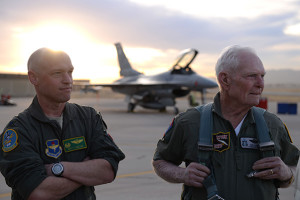 In March of 1967, a flight of F-4 Phantom IIs from the 433rd Tactical Fighter Squadron based out of Ubon Royal Thai Air Force Base, Thailand, flew through clear skies for a bombing run on a steel mill in North Vietnam.

In the other, Capt. Bob Pardo and his weapons system officer watched. They knew their wingmen, Capt. Earl Aman and 1st Lt. Robert Houghton, were in trouble. They had already lost so much fuel that they would not be able to reach the safety of Laotian airspace or the KC-135 refueling tanker waiting for them there.

Looking below, Pardo saw miles and miles of rice paddies. Ejecting over this area of North Vietnam all but guaranteed capture. Pardo acted quickly. Lining his plane up with the other Phantom’s tailhook, he rose up slowly until the hook made contact with his cockpit canopy, which cracked slightly. Pardo then went full throttle.

In this extraordinarily dangerous position, Pardo used his Phantom to push his wingmen almost 90 miles, just across the border of Laos. Pardo’s own aircraft caught fire, and both aircrews ejected into the coverage of the jungle below. They were rescued less than two hours later.

“I’m just like any other fighter pilot,” Pardo, now a retired lieutenant colonel, said. “I just got lucky for a day and did something that hadn’t been done.”

For his act, now known as “Pardo’s Push,” Pardo and his weapons system officer were awarded the Silver Star. More than four decades later, his name and his maneuver still have meaning to those who serve and fly today.

“For us as fighter pilots now, Lt. Col. Pardo stands as a sterling example of exactly what we should aspire to,” said Maj. John Powers, 310th Fighter Squadron weapons officer. “Throughout his career, and especially in combat, his ingenuity, his dedication to his comrades, and his dedication to his job and service to this country are things we aspire to every day.” 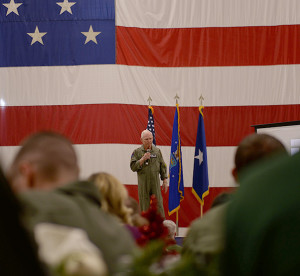 Retired Air Force pilot Lt. Col. Bob Pardo speaks to a group of graduating 310th Fighter Squadron F-16 Basic Course pilots and their friends and families at Luke Air Force Base, Ariz., Dec. 13, 2017. Pardo famously prevented the capture of another aircrew by using his aircraft to push their damaged jet into friendly airspace during the Vietnam War in what came to be known as “Pardo’s Push.”

At Luke, the latest class of F-16 Basic Course student pilots, designated BBG-17, graduated from the 310th FS’s training curriculum Dec. 14, 2017. Pardo spoke to the students at their graduation ceremony.

“What I try to do is to help them realize how important they are,” Pardo said. “We’re not just in a big flying club. We have a job to do, and we only get the best people there are to come do it.”

The Air Force is currently facing a severe pilot shortage, more than 2,000 below its optimum requirement. Part of the problem is in retaining pilots after they gain the experience necessary to staff the primary combat ranks of the force.

“What we’re trying to do now in their training is to prepare these fighter pilots to commit to all of the years down the road,” Powers said. “We teach them what it means to be a fighter pilot, teach them the heritage of the fighter pilot culture founded by pilots like Pardo, teach them how important it is for us to carry and pass on that torch, and instill the culture and that internal desire to win into them. I think that is what will carry them on through 10, 20, 30, or 40 years as a fighter pilot.”

The Air Force hopes that retention efforts, expanded training, and improvements to the quality of life for Airmen will reduce the shortage.

“After World War II ended, still 10 percent of the men and women of the United States were serving in the armed forces,” Pardo said. “Today, that number is eight tenths of one percent. We’ve had some really great advances in technology and aircraft, but the shortage is really putting a workload on every person we have flying these aircraft.” 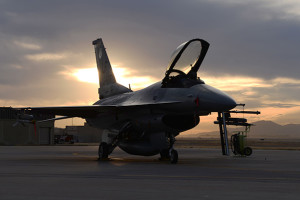 Pardo’s hope is to inspire the pilots of BBG-17 to understand their role in maintaining the national air defense standard. He recounted his tale and other Air Force experiences he lived through, both good and bad, to reflect the idea that their careers would follow in the same footsteps.

“There’s something in you that says, ‘Hey, I want to be a fighter pilot,’ and then you go through whatever it takes to achieve that goal,” Pardo said. “Those graduates looked to me like eager young people ready to go do the job.”

This wasn’t Pardo’s first B-Course speech, nor was it the first time he’s been in the spotlight for his legacy. Still, after a long day of shaking hands, posing for photos, and motivating Airmen through visits to various sections of the 310th, Pardo reminisces about the attention his reputation earns him in a chat after dark with a few pilots in the 310th heritage room.

“There’s just something incredible about stepping outside and having someone cross a flight line just to shake your hand,” Pardo said. “It has an unusual effect on me every time it happens.”