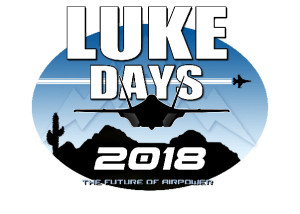 The 56th Fighter Wing at Luke Air Force Base, Ariz., has moved Luke Days to March 17-18, 2018, in order to ensure the public a more robust and dynamic experience. The event is free and open to the public.

The upcoming air show marks Luke’s 77th year of operation since its founding in 1941. The show will be headlined, for the first time since 1992, by the U.S. Navy Blue Angels aerial demonstration team.

The F-35 Lightning II and the F-16 Fighting Falcon will be among the static displays. The schedule of aerial performers and full list of aircraft on static display is being finalized.

Luke welcomed more than 425,000 spectators during the air show weekend in 2016 and expects to host that many Arizonans again.

Luke AFB’s website (www.luke.af.mil/2018-Luke-Days) features a page dedicated to Luke Days 2018 providing the most up to date information as it becomes available.