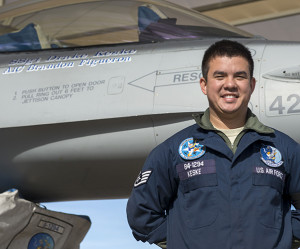 Staff Sgt. Drake Keske, 309th Aircraft Maintenance Unit dedicated crew chief, poses for a portrait in front of his assigned aircraft at Luke Air Force Base, Ariz., Jan. 25, 2018. Assigned to an F-16 Fighting Falcon, Keske is one of many technically proficient maintenance professionals from the 309th AMU. The name of the DCC and assistant DCC are displayed alongside their assigned aircraft in honor of their dedication.

Crew chiefs have played an invaluable role in the advancement of aviation over the past 100 years.

From the early days of Charles Edward Taylor, a vital contributor to the building and maintaining of the first aircraft engine, to the approximately 100,000 maintainers who ensure air superiority today, crew chiefs work to keep aircraft flying and mission-ready.

Among these crew chiefs are a select few who hold the title of dedicated crew chief. Spending countless hours inspecting and maintaining every square inch of their aircraft, DCCs are assigned to a single aircraft and are ultimately responsible for not only that aircraft but also the safety of their pilots.

“DCCs are selected by their section chiefs based on initiative, leadership qualities, and knowledge of their aircraft,” said Staff Sgt. Drake Keske, 309th Aircraft Maintenance Unit DCC at Luke Air Force Base, Ariz. “Most crew chiefs who come to Luke start learning the responsibility of their jobs and their actions, but becoming a DCC takes being a step above the rest to earn the title.”

Each aircraft at the 56th Fighter Wing has its DCC’s name displayed on the side of the aircraft, along with the name of the assistant dedicated crew chief. These crew chiefs have multiple responsibilities that require extreme attention to detail. They don unique uniforms to signify their important role.

“On a daily basis, we come in to perform our pre-inspections on our aircraft ensuring everything is in perfect shape,” said Senior Airman Eric Medina, 309th AMU DCC. “Once we launch and recover our jets, we perform another inspection to ensure everything is still in tip-top shape.” 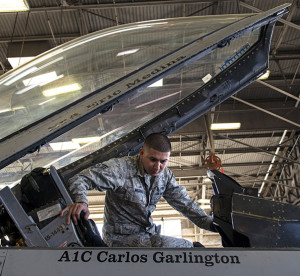 Setting them apart from the rest, DCCs take full responsibility for their entire aircraft by also making exterior modifications.

“Typically, we come in to check our tools according to our shift, but for DCCs, our job is tailored around what we can do to our aircraft to improve it,” Keske said. “During our off-time, we like to personalize our aircraft by placing our squadron logos and emblems on the side which give us a sense of pride and ownership of what we work hard on every day.”

Another important aspect of being a DCC is building credence with pilots.

“It’s important we maintain good relationships with the pilots we have,” Medina said. “It’s a great feeling knowing there is mutual trust in having everything taken care of when it comes to the knowledge of our aircraft.”

The camaraderie and unwavering partnership between pilots and DCCs foster a team environment to accomplish the mission.

“Aside from having my name on the side of the aircraft, there’s such a great sense of gratification knowing I can put my jet and pilot in the air safely and fulfill a sortie to accomplish the mission of building the future of airpower,” Keske said.