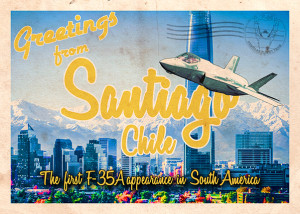 Two F-35 Lightning II’s assigned to the 56th Fighter Wing at Luke Air Force Base, Ariz., have landed in South America for the 2018 Feria Internacional del Aire y del Espacio marking the first time the F-35 has been to South America.

The aircraft arrived in Santiago, Chile, March 30 and will be on public display at the FIDAE air show that runs April 3 through April 8.

Bringing the F-35 to FIDAE helps meet training needs for the aircrews and maintenance personnel for various operations including long-range flights, air-to-air refueling, as well as provides an opportunity to strengthen military-to-military relationships with regional partners.