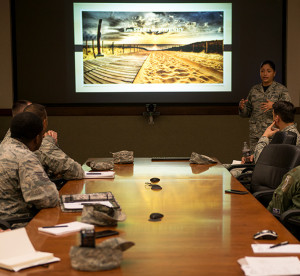 Two Thunderbolts at Luke Air Force Base, Ariz., recently received the 2017 Profession of Arms Center of Excellence Leadership Impact Award for their contributions in shaping Air Force culture by impacting Airmen’s professional growth and development within the 56th Fighter Wing.

PACE is dedicated to strengthening Air Force professional culture by providing leadership tools to ensure Airmen receive a continuum of professionalism development training at the appropriate milestones throughout their careers.

Roe and Tamariz both contributed to enhancing the professional growth of Airmen across the 56th FW through their dedication in facilitating and developing various leadership development courses.

“When getting started, our first few classes had very few people, but when people starting talking about it, we saw tremendous growth to the point where now we have a waiting list of people who want to take the class,” Roe said.

Over the past few years, Roe has developed and facilitated a number of leadership and professional development courses at Luke to include Lego Leadership, Team Building Across Generations and Bullet Writing 101. These courses, coupled with her unique teaching style, have created a positive learning environment for Airmen.

“I think the way most formal professional development courses are taught are by concept,” Roe said. “I try to focus on application in all my classes, using various hands-on tools to engage student’s learning senses so they’re able to retain information.”

Roe has also played a vital role in supporting the Total Force Initiative by creating and teaching classes for Oregon Air National Guardsmen assigned to the 173rd Fighter Wing where the 56 FW has a geographically separated unit, the 550th Fighter Squadron. 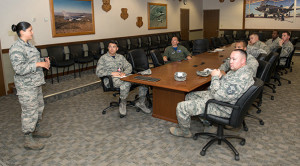 “There are many different aspects to BOLT,” Tamariz said. “We reach out to programs such as the First Term Airman’s Center courses, Non-Commissioned Officer Professional Development Courses, and Airmen Leadership School. The intent is to reach across the 56th FW and provide valuable resources for Airmen of all ranks to improve their professional improvement.”

These resources include potential leadership off-site classes and the opportunity to attend the Next Jump Academy, a three-day leadership development workshop held in Boston and New York City.

By gaining personal growth through the BOLT initiative, Tamariz plans to share her experiences with Airmen at her next assignment.

“The amount of time and resources that has been invested in me will carry over to everyone who I come in contact with at my next assignment,” Tamariz said. “I think this award is awesome, but I think the award is only possible if you’re doing things right.”

As Tamariz and Roe continue their Air Force careers, they plan to share lessons learned and grow their skills in focusing on culture with a campaign mindset for Airmen at the 56th FW.

Why we have Black History Month