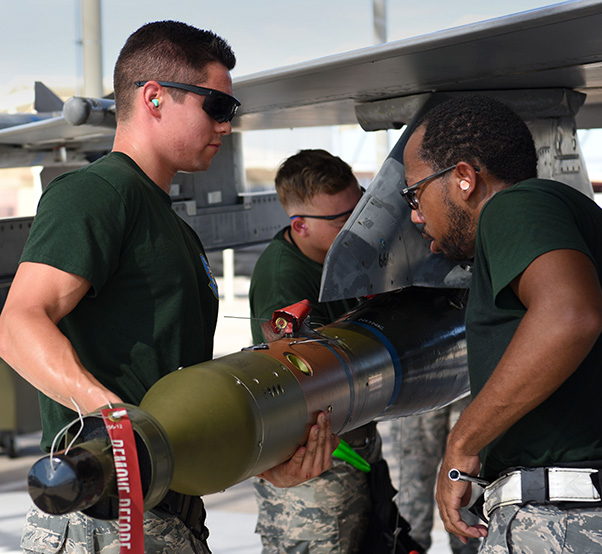 Airmen assigned to the 310th Aircraft Maintenance Unit with the 56th Fighter Wing load a bomb on to an F-16 Fighting Falcon, July 13, 2018 at Luke Air Force Base, Ariz. The 310th AMU is one of the participants in the 56th MXG 2nd Quarter Load Competition.

Various maintenance units across the base competed to be the best load crew by demonstrating their skills and mission readiness.

The competition included written tests, transporting munitions, and loading them onto a jet with minimal errors while being timed.

The 63rd Aircraft Maintenance Unit load crew accomplished all those tasks more efficiently than their competitors and took home the title of being Luke’s best load crew of the quarter. The three man team attributes their success to practice and good leadership. 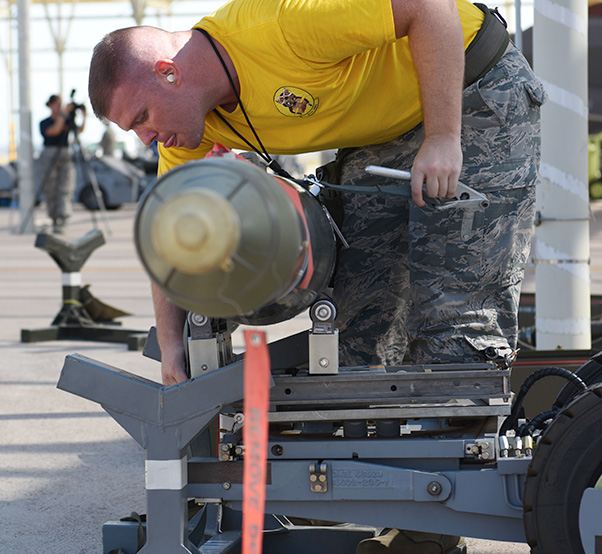 Typically lasting 25 minutes, teams used a weapons loader to affix a GBU-12 Paveway II bomb and an AIM-9 Sidewinder missile to an F-16 Fighting Falcon and the F-35 Lightning II.

The GBU-12, a laser guided bomb weighing more than 500 pounds, is used for air-to-ground attack. The AIM-9, an air-to-air missile, has an average weight of more than 300 pounds. In order to lift and transport these munitions load crews use the MJ-1 Jammer weapons loader. 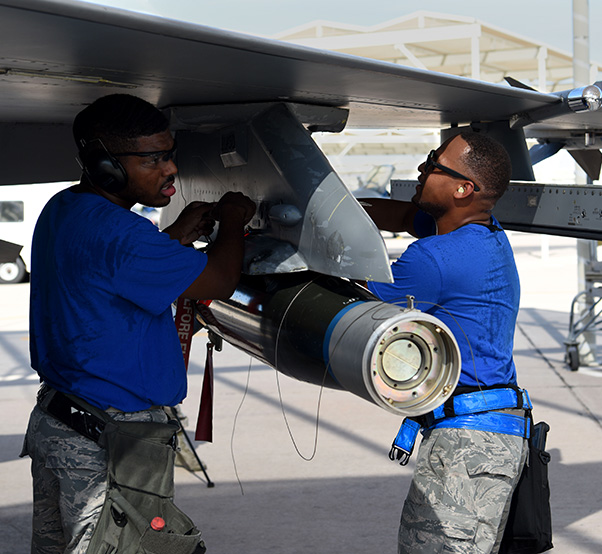 Airmen from the 62nd Aircraft Maintenance Unit compete in the 56th Maintenance Group 2nd Quarter Load Competition, July 13, 2018 at Luke Air Force Base, Ariz. The load crew hoists a bomb up to a F-16 Fighting Falcon pylon where they must connect it quickly and efficiently.

“There’s a lot of pressure on me as the Jammer driver,” said Senior Airman Jason Hansford, 63rd AMU weapons load crew member. “Getting the piece of ordnance loaded without hitting the aircraft is the most important part. There is a lot of preparation that goes into this event, this was my third competition with my current team and it feels great to finally break through and win.”

The event is aimed at building morale and keeping tradition. To make sure that standards are met, all load crews must complete a monthly certification to ensure success.

“Load competitions have been a tradition ever since weapons has been weapons” said Roberts. “We put the force in Air Force.” 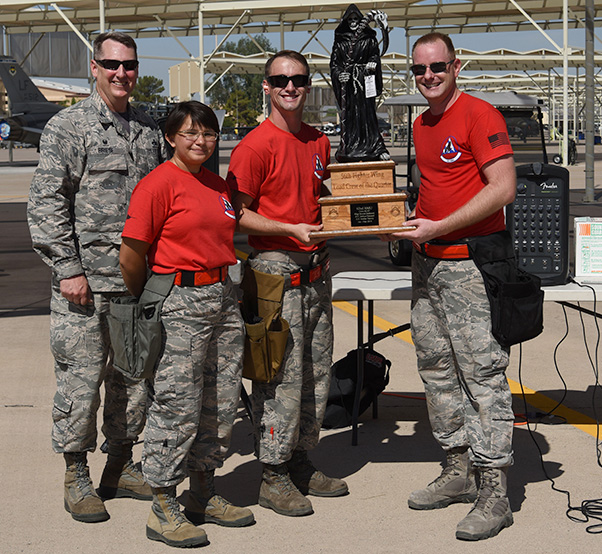 Col. Scott Briese, 944th Maintenance Group commander, presents the load crew of the quarter trophy to members from the 63rd Aircraft Maintenance Unit, July 13, 2018 at Luke Air Force Base, Ariz. The load crew were able to successfully load a bomb into the F-35 Lightning II faster than all of their competitors.

Luke one of three bases OK’d for shorts on flightline