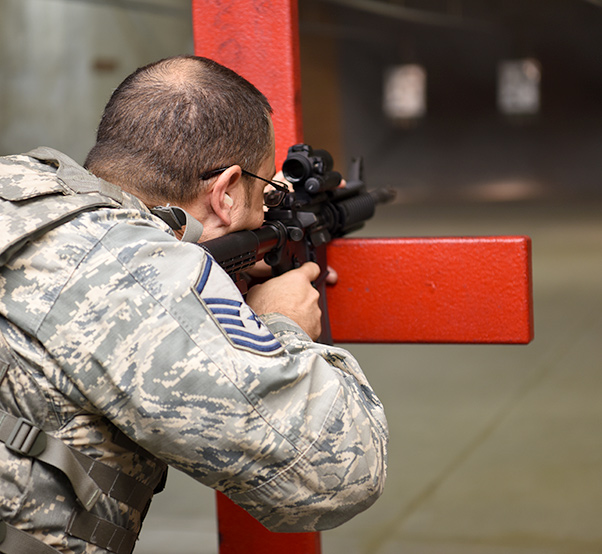 Empty brass casings ejected from an M4 Carbine cover the firing range floor as Thunderbolts send round after round into cardboard silhouettes.

The cacophony of bangs that ring off of the insulated walls are a routine sound during weapons qualification classes, which the 56th Security Forces Combat Arms Training and Maintenance flight conducts for more than a thousand Airmen each year.

“In 12 months we can easily average out 100 students a month,” said Staff Sgt. Jason Jones, 56th SFS CATM instructor. “We estimate that we train around 1,200 Airmen a year.”

In order to make the range as safe as possible, CATM instructors cover weapon safety multiple times throughout a class session prior to live firing.

“We go over the safety of how to handle the weapons and what not to do with them,” Jones said. “Then we issue them an M4 and show them how to properly clear it out. After the classroom portion, we’ll take them out to the range and divvy out their ammo. We’ll do more safety, then engage in firing.” 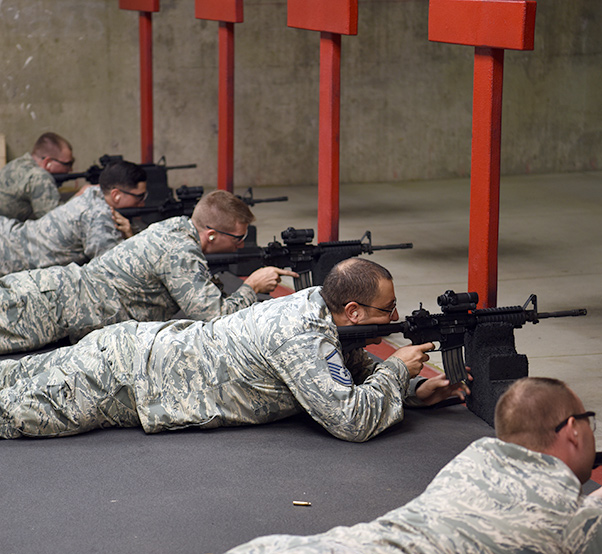 Airmen from units around base participate in M4 Carbine training July 31, 2018, at Luke Air Force Base, Ariz. The 56th Security Forces Squadron Combat Arms Training and Maintenance flight train Thunderbolts on an assortment of weapons to keep them combat ready.

Some of the Airmen who go into CATM haven’t had the opportunity to fire a weapon since basic training, which adds inexperience to the list of dangers inherent to the firing line. CATM instructors must be vigilant in ensuring the safety of themselves and their students.

“Students who haven’t shot since basic, they might be nervous on the range, might not be paying attention due to induced anxiety,” Jones said. “A lot of people are afraid of weapons, so they might accidently flag another student or an instructor. They’re not really thinking about the hazards.”

Though hazards are present in weapons training, there are important reasons to become qualified. In some cases, weapons competency is the difference between life and death.

“It’s important because there’s a real possibility that they may have to put this weapon to use and if they don’t have any form of training on the weapon, it could drastically affect the outcome,” said Nathaniel Mcnutt, 56th SFS CATM instructor. 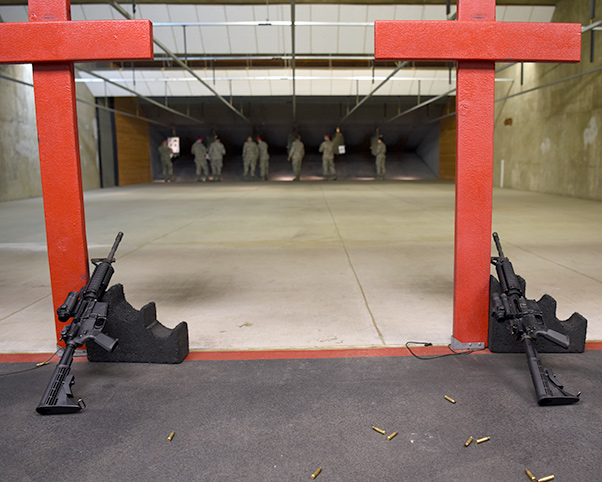 Airmen training with the 56th Security Forces Squadron Combat Arms Training and Maintenance flight on the M4 Carbine go down the firing range to check their progress July 31, 2018, at Luke Air Force Base, Ariz. CATM instructors take time to work with each Airman to help perfect their aim and skill.

Once Airmen reach their first duty station and complete upgrade training in their primary duty they have the opportunity to deploy, making weapons qualification an important step in their deployment check list.

“Airmen who may have a (permanent change of station) overseas or deploying, they need to be able to maintain their weapon and properly use their weapon in case something were to happen,” Jones said. “We’re sending these people all over the place where there’s potential for them to be in harm’s way and they need to effectively employ their weapon.”

The instructors at CATM are confident that combat arms training will remain a constant priority for the 56th Fighter Wing as it drives forward in its mission to train combat-ready Airmen.