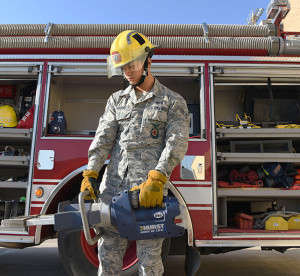 As firemen arrive at the residence they can feel the scorching heat from the inferno that lies before them.

The entire house is engulfed in deep red and amber flames as bellows of ash and smoke fill the air. Instinctually, the firefighters jump into action, working as a team to extinguish the blaze.

This situation is nothing out of the ordinary for 56th Civil Engineering firefighters at Luke Air Force Base, Ariz. Luke’s firemen train constantly with surrounding fire departments to maintain competency in all training and safety procedures whether military or civilian.

“Safety in our career field is paramount,” said Tech. Sgt. Richard Durstine, 56th Civil Engineer Squadron station captain and standing assistant chief. “Every morning we do truck checkouts to make sure that the trucks are ready to go to respond to any type of emergency during the day.”

On a daily basis, Luke’s firemen have the possibility of being exposed to deadly fires, car accidents and potential aircraft incidents. The National Fire Protection Agency issues more than 300 consensus codes and standards intended to minimize the risks and dangers of fire response.

Most Air Force bases have a mutual aid agreement. Luke is unique for having an automatic aid agreement with surrounding cities. Instead of having to request Luke’s support for the next town over and waiting for dispatch to contact the fire station, 911 calls are routed directly to Luke so that Luke firefighters can immediately respond. 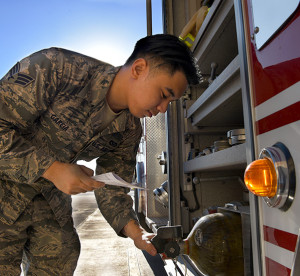 Senior Airman Jammie Garcia, 56th Civil Engineer Squadron firefighter, looks over equipment on a fire engine Aug. 6, 2018, at Luke Air Force Base, Ariz. Every morning, the crew performs checkouts to ensure the fire trucks are ready to respond to any type of emergency throughout the day.

“What automatic aid does is take those borders away,” said Durstine. “It takes those city lines away and it gets the [distressed individual] the closest unit, the fastest people who can get there and the best support that they can get without all the [bureaucracy]. We do whatever we have to do to take care of the [individual].”

Luke responds consistently within Surprise, Glendale, Peoria, Goodyear, Avondale, Phoenix, and other metro areas in Arizona. Not only does the automatic aid agreement mean that Luke helps these cities, but those partner cities can come on base and help out in the same way.

The West Valley Regional Fire Training Consortium in Glendale partners with the Glendale Regional Public Safety Training Center to provide quarterly training for fire departments in surrounding cities, including Luke, to ensure preparedness.  Every quarter, a different type of training is selected and different fire departments are chosen to train together.

“One of the really cool things about it is that this year the fourth quarter training will be taught by us to the rest of the valley on the F-35 and the F-16 and how to handle [any potential aircraft incident] or emergency landing in their area,” said Durstine.

The fire departments involved will receive training on aircraft fire and emergency response, and have hands on learning on what to touch and areas to avoid. Other Luke units such as the 56th Medical Group have opportunities to participate in the training as well. 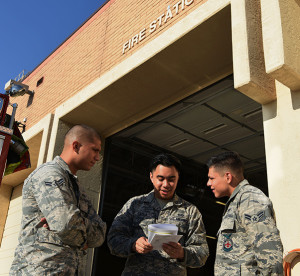 Firefighters from the 56th Civil Engineer Squadron review a safety checklist Aug. 6, 2018, at Luke Air Force Base, Ariz. Luke has an automatic aid agreement with surrounding cities allowing Luke firefighters to immediately respond to an incident if they are the closest unit on or off base.

“Whenever we do any training or burns we have an ambulance on standby in case anyone needs to fall out,” said Senior Airman Jammie Garcia, 56th Civil Engineer Squadron firefighter.

By training so closely with neighboring cities and implementing such strict safety precautions, the Air Force as a whole is being changed from inside the 56th Fighter Wing.

“Automatic aid in itself started here, we were one of the first ones to do it,” said Durstine. “The rest of the Air Force is now looking at it as a much faster way to work with the community and a better way to help them. Our downtown relationship is, as far as I’m concerned, bar none the best in the entire Department of Defense.”