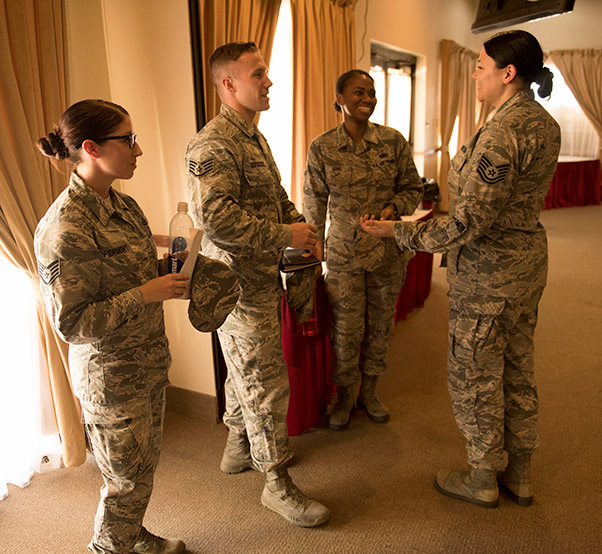 From planning base tours and interacting with foreign military officials to overseeing pilot graduations, the dedicated and behind-the-scenes work of protocol Airmen is never done.

The 56th Fighter Wing Protocol office at Luke Air Force Base, Ariz., is the focal point when it comes to hosting distinguished visitors, handling official ceremonies and taking care of invitations for wing events. The protocol office also handles details that many may overlook such as personalized marquees, having water readily available so visitors are comfortable in the Arizona heat, and coordinating lodging and transportation for guests.

“Protocol team members are ‘jacks of all trades’ when coordinating distinguished visitors, itineraries, scripts, seating charts, receptions and overseeing wing ceremonies,” said Rodney Winfield, chief of wing protocol. “We have to know a little bit about everything — or know the right person to contact in those times that we don’t.”

Often times, protocol is the first contact visitors have with the wing. They regularly have the opportunity to meet a variety of influential people and showcase Luke’s mission.

“Here at Luke, because we have the F-35 mission and foreign partners coming here for training, not only do we have U.S. visitors, but we have foreign country leaders as well,” said Tech. Sgt. Courtney Gore, noncommissioned officer In charge of protocol. “We’ve had chiefs of air force, the Minister of Defense and the Chief of Defense from other countries come here and we provide them an opportunity to see what Luke has to offer.”

Winfield goes on to explain the different ways protocol works together to make a visit to Luke Air Force Base a successful and memorable one. One way the protocol office accomplishes this is by establishing a theme for the guest and then accordingly basing their experience at Luke off of what they want to learn about.

Protocol also frequently engages with the community and different on-base organizations. Keeping bonds within Luke strong and not only being part of the community, but being actively engaged in the community is key.

“We couldn’t do what we do without the support of the organizations on this base,” said Winfield. “We are a support agency and we do everything we can to support them, but in turn, in order to showcase the 56th Fighter Wing and show the base and the community what we do on a daily basis, we depend on the support from other organizations.”

The protocol office manages on average three events a week. Although it can be a demanding job, it supports the successful accomplishment of Luke’s mission.