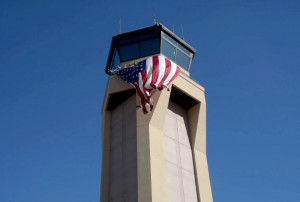 Thunderbolts climbed the Air Traffic Control Tower to honor the first responders who lost their lives during 9/11.

On the morning of Sept. 11, 2001, four aircraft were hijacked and flown into the North and South Towers of the World Trade Center, N.Y., the Pentagon, Va., and into a field in Stonycreek Township, Penn.

Around 3,000 people were killed that day to include more than 400 emergency responders.

In honor of the sacrifices made by emergency responders during the attacks, members from the 56th Fighter Wing came together for a 9/11 Remembrance Ceremony.

“We held a ceremony to honor the fallen first responders of 9/11,” said Tech Sgt. Justin Hatch, 56th Civil Engineer Squadron Fire Department Alpha Shift station captain. “We wanted to combine all the first responders on base for a unified effort.”

The ceremony included a recollection of the tragic events, a Last Alarm bell ringing and a Tribute Tower Climb.

“My biggest memories was the patriotism that I saw across this country,” said Col. Robert Sylvester, 56th Mission Support Group commander. “It was one of these times you get stronger in the broken places. We were broke, we were hurt, we were wounded, but we became stronger as a country.”

Soon there will be people joining the military or becoming a first responder who were born after 9/11 or were too young to recall the events from that day.

“If you think about this 17 years ago, pretty soon we’re going to have Airmen joining our Air Force who were born after 9/11. This is history to them, they didn’t live it,” said Sylvester. “We have Airmen here who were 1, 2, 3, 4 years old and they don’t necessarily recall any of it other than what they might see on the news.”

Sylvester encouraged members of the audience to remind themselves of the importance of serving.

Following the ceremony, attendees scaled 10 flights of stairs during a Tribute Tower Climb, honoring the first responders who paid the ultimate sacrifice. Each participant held a streamer with a name of a fallen first responder as they climbed.

“We have 411 streamers representing the number of the first responders that passed away during 9/11,” said Hatch. “We’re taking them up and then clipping them to the top of the tower. Our goal is to show unity as first responders and to honor the people who passed away.”