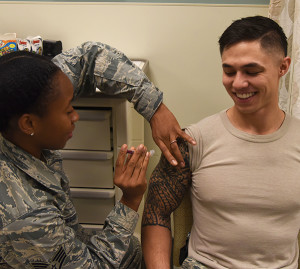 With the flu season nearing, the 56th Medical Group at Luke Air Force Base, Ariz., is preparing the seasonal influenza vaccine, giving Thunderbolts the opportunity to protect themselves from the virus.

According to the Centers for Disease Control and Prevention, seasonal influenza, or flu, is a contagious respiratory illness caused by influenza viruses and typically occurs during the late fall through early spring.

“The flu is a virus that negatively effects people and can even kill multiple people throughout the year,” said Staff Sgt. Gisele Adanlete-Engram, 56th Medical Group aerospace medical technician. “The season for it is generally August through May.”

The incubation period for influenza is 1–4 days, accompanied by symptoms such as tiredness, fever or chills, sore throat and diarrhea and vomiting.

“The flu can be contracted by someone coughing or even by someone not washing their hands,” said Adanlete-Engram. “Exactly what strains will be covered by the vaccine doesn’t come out until the prevalence of the flu is a little higher, but strains A and B will definitely be covered.”

The flu and the common cold are both respiratory illnesses but are caused by different viruses. These two illnesses can have similar symptoms and can be difficult to tell the difference between them. However, knowing the symptoms of the flu is critical as it can cause mild to severe illness.

Annual vaccination for influenza is required for all U.S. Air Force active duty personnel, trainees and reserve components. Some individuals are more susceptible to developing serious flu-related complications such as children younger than 5, adults 65 years of age and older, pregnant women and those with compromised immune systems.

“Priority goes to active duty members first, than high risk patients such as children over 6 months of age and elders over the age of 65 years,” said Adanlete-Engram.

The 56th Medical Group is hosting a flu drive Oct. 15 at the Bryant Fitness Center, giving active duty members an opportunity to receive the flu vaccine. For more information, contact the Immunization Clinic at 623-856-7420.