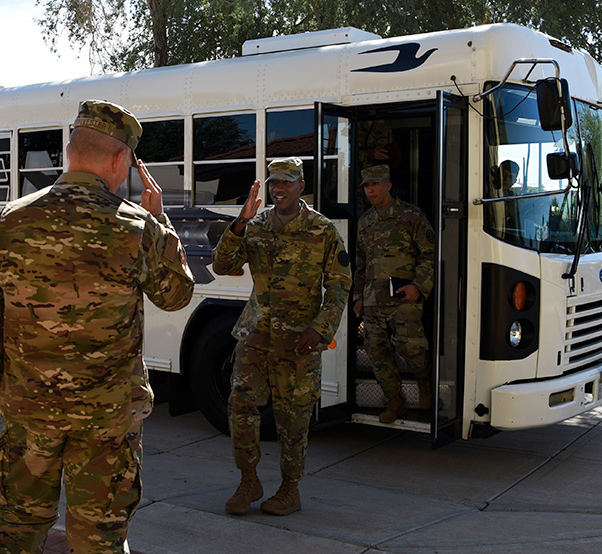 While visiting the 56th MDG, Wright stopped at stations throughout the facility to listen to Airmen and their concerns or feedback. Airmen addressed enlisted performance reports, computer based training, operational camouflage pattern uniforms and leadership standards. Wright left them with a personal story and wisdom on how to overcome their obstacles.

“My greatest obstacle was myself,” said Wright. “In my career and in my life, whenever something bad happened it was always somebody else’s problem. I was always placing blame on others around me until I realized as a senior master sergeant. I was stationed in Korea and I had a young senior airman who told me I was a hypocrite. He helped me understand that I was responsible for my own destiny. He forced me to go home and look in the mirror and realize that I was responsible for my own actions. Once I was able to take responsibility for myself I was able to progress forward.” 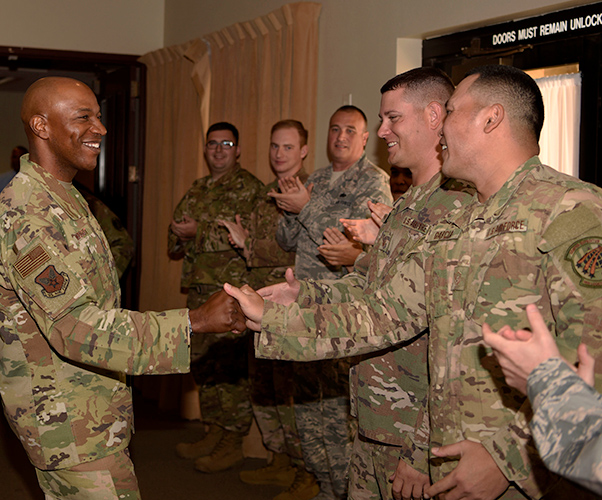 Chief Master Sgt. of the Air Force Kaleth O. Wright meets Airmen during a meet and greet at Club 5/6, Oct. 22, 2018, at Luke Air Force Base, Ariz. Airmen from around the base gathered to listen to Wright address many topics pertinent to the future of the Air Force.

As the CMSAF’s visit continued, he stopped to talk with Airmen in the 607th ACS about physical fitness, character and attitude. He spoke on developing the Air Force’s core values as part of their character and making it something that is important to them.

Wright spoke on keeping oneself disciplined with physical fitness and making sure you are always ready.

“You have to keep yourself disciplined before someone else does,” said Wright “Nobody is going to tell you when to get up and run, that’s all on you.”

As the visit to Luke came to a close, the message that Wright ensured he passed on was to eliminate the phrase “that’s good enough”. Wright made sure that all of the Airmen he spoke with remembered the key message of making sure we live by the core values, especially “Excellence in all we do”.

“If it can be better, then good isn’t enough,” said Wright. “Always strive for excellence.” 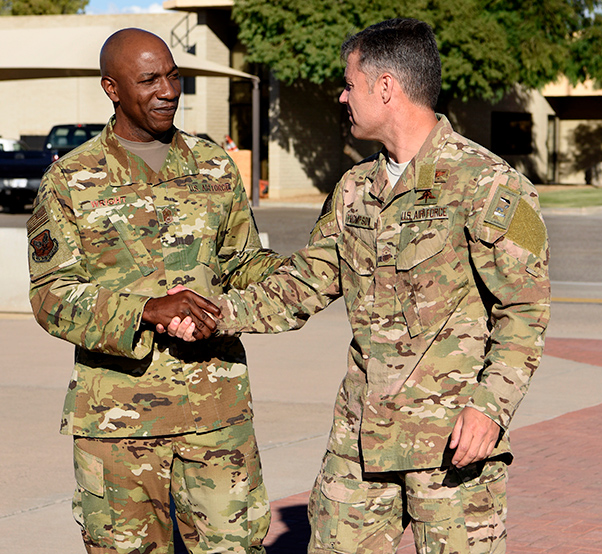 Chief Master Sgt. of the Air Force Kaleth O. Wright shakes hands with Chief Master Sgt. Ronald Thompson, 56th Fighter Wing command chief during a base tour Oct. 22, 2018, at Luke Air Force Base, Ariz. During the tour, Wright spent the day engaging with the men and women at Luke AFB and gaining insight on Luke’s mission.