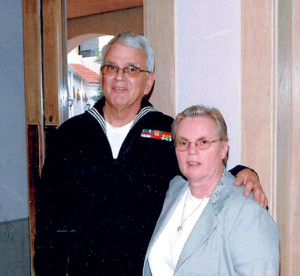 Richard States and wife, Sharon, pose for a photo at the USS Mauna Kea reunion in 2009 in San Antonio.

There used to be an ad commonly seen in the 1960s that stated, “Join the Navy and see the world.”

An accomplished violin player in middle and high school who played in the school orchestra took these words to heart.

Richard States spent 20 years in the active Navy and eight years in the Naval Reserve and had the opportunity to see a good part of the United States and the western Pacific Ocean.

He chose the Navy because it seemed to be the best military option at the time, and besides, it offered travel to many areas of the world, he said.

States, a native of Wausau, Wisconsin, made his debut in the Navy in March 1966 soon after graduating from Wausau High School and was assigned to an ammunition ship, USS Mauna Kea. He would would serve on that ship until September 1969.

“We had stops in Da Nang Harbor, Vietnam in May 1968, and we were tasked to provide ammunition to many carriers, guided missile cruisers and destroyers in the Tonkin Gulf,” he said.

His early years in the Navy gave States the opportunity to meet people from all areas of the United States and the world.

“It didn’t matter where we were from,” he said. “We shared in the mission of serving our country.”

States was honorably discharged in September 1969, but he got back in the game on a part-time basis, enlisting in the Naval Reserve in March 1972 until August 1980.

His Reserve duty station took him back to his home area.

“My home area was mainly Milwaukee,” he said. “In addition to Milwaukee, I also served at the Naval Station Great Lakes, (Illinois).”

However in 1980, States faced a tough decision.

“I was living with my wife and two young sons in Waukesha, Wisconsin, and my civilian job was gone,” he said. “I made the decision to go back in the active Navy.”

His first assignment was at Naval Air Station, Wallow Grove, Pennsylvania. He said he enjoyed this assignment because it gave him the opportunity to deal with the different commands on base.

States served at this assignment until 1983, and then he received orders to the Naval and Marine Corps Reserve Center, Madison, Wisconsin.

Three years later in 1986, he got orders that took him to the Naval Reserve Readiness Command Region Six, Washington. 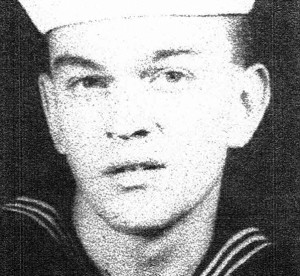 This assignment was busy and challenging.

“Region Six was comprised of approximately 10 Reserve centers in Maryland, Virginia, Pennsylvania and West Virginia,” he said. “We traveled to Reserve centers and inspected them in administrative areas. As a Yeoman First Class, it was my responsibility to evaluate them.”

It was back to NAS, Wallow Grove, in 1989 with Patrol Squadron (VP) 66, which included a deployment to Bermuda.

The command was very active and a busy one, but it was enjoyable, and it was rewarding to be part of it, States said.

His next assignment was a few hundred miles away at the Naval Reserve Center, Chicopee, Massachusetts, in 1992, which had six Navy Reserve units at the center. The center was located at nearby Westover Air Reserve Base.

The Reserve Center at Chicopee closed a year later as part of the 1995 Base Realignment and Closure Commission.

As the sun was setting on States’ career, he was back at Naval Reserve Readiness Command Region Six and a short time later, he was transferred to the Fleet Reserve. It was time to retire with 20 years of active service and eight years in the Reserves. He retired as a Yeoman First Class in 1996.

States has been married to Sharon for 49 years and has two grown sons, Andy and Tim. He moved to Arizona in 2008 and lives in Tucson.

He stated his feeling about his service simply and succinctly.

“In all, my time in the Navy was very good. Like any job, there were ups and downs through the many years I served, but most of all, I was proud to serve my country.”