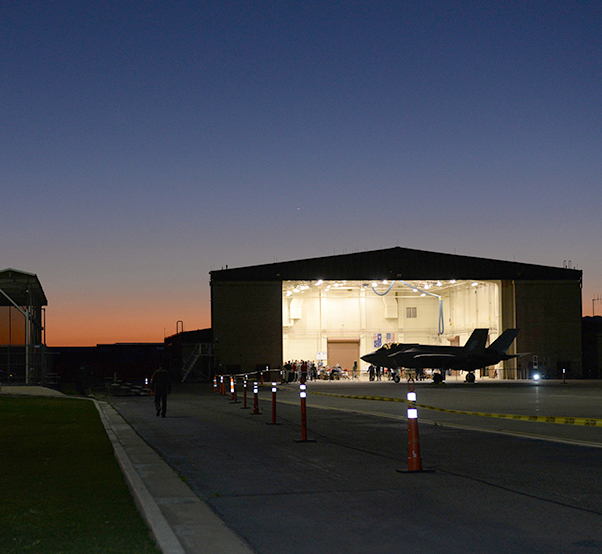 Since the arrival of Australia’s first F-35A at Luke Air Force Base, Ariz., in December 2014, Australian pilots and maintainers have trained side by side with members from the U.S. Air Force and Lockheed Martin in preparation for the day when Australian F-35s would travel home to Australia.

That day is quickly approaching as No. 3 Squadron of the Royal Australian Air Force will travel with two F-35s to Australia in early December.

The unique history of No. 3 Squadron makes it particularly fitting that it has been here in the US training in preparation for their F-35 program’s next step.

“In 1918, No. 3 Squadron of the Australian Army Flying Corps was operating out of western France when it flew its ‘Harry Tate’ RE8 aircraft, and successfully dropped ammunition supplies at low level to both Australian and American forces in the Battle of Hamel,” said RAAF Air Attache Terry Van Haren.

From that moment one hundred years ago, a strong friendship was formed. A friendship more fondly referred to as a “mateship”. 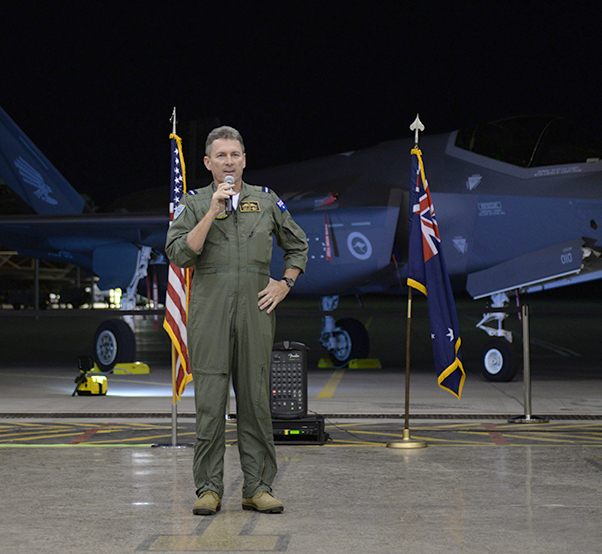 Royal Australian Air Force Air Attache, Air Commodore Terry Van Haren speaks to a crowd at an Australian Mateship Event, Nov. 9, 2018, at Luke Air Force Base, Ariz. Van Haren spoke of the lasting friendship between Australia and the U.S. and its early beginnings in World War I during the Battle of Hamel.

“It’s a friendship that’s formed under difficult circumstances. We’re there for each other in the good times and bad,” said RAAF Wing Commander Darren Clare, No. 3 Squadron Commander. “Australia has been fighting alongside the US in every major conflict since World War I. It’s an ongoing and enduring friendship, whereby we rely on each other for support in those times of need.”

As their way of saying thank you, and with the support of the Australian Embassy, Royal Australian Air Force members held an Australian Mateship Event on Nov. 9, 2018 at Luke AFB.

“In the spirit of the ‘100 Years of Mateship’ campaign, we wanted to say thank you for the support so far to get us to this point,” said Clare. “It’s not the end. Australia will have a presence here in the 61st Fighter Squadron for a number of years to come, but we appreciate all that you’ve done to get us where we are today.” 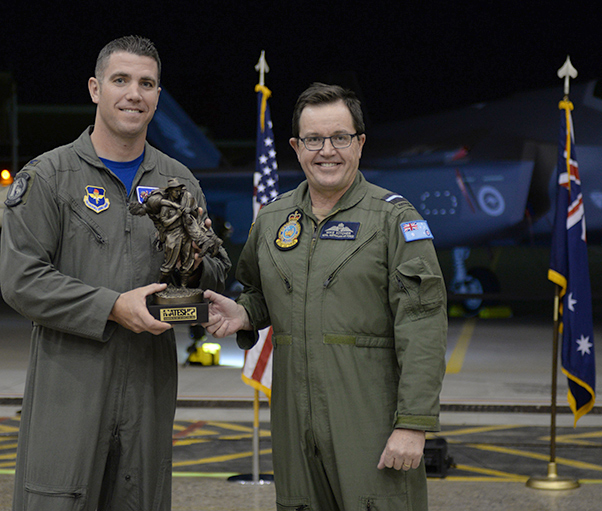 Royal Australian Air Force Air Commodore Michael Kitcher presents a mateship statue to Col. Michael Renbarger, 56th Operations Group commander, at an Australian Mateship Event, Nov. 9, 2018, at Luke Air Force Base, Ariz. Kitcher thanked Renbargar and members of Luke Air Force Base for their training and hospitality in preparing No. 3 Squadron for the next step in the country’s F-35A program in Australia.

The event highlighted the friendships made over the last four years, and it was clear that the bond was shared by all.

“There’s no greater way to show your faith and trust in one another than to fly each other’s jets and to train each other’s pilots,” said Lt. Col. Rhett Hierlmeier, 61st Fighter Squadron commander. “We appreciate you and all that you’ve done for us as well.”

“It’s been phenomenal. I’ve flown with several USAF pilots in the past and to be here in the Luke community, to be fully embedded within the squadron so tightly and be trusted to train your next generation of F-35 pilots is a pretty big honor,” said Clare. “We’ve been supported with whatever we needed on base and achieved a level that we wouldn’t have been able to get to if we just did this on our own.”