Lt. Gen. Dorothy Hogg, Air Force Surgeon General, paid a visit to Luke Air Force Base., Ariz., on Dec. 12, 2018, where she outlined her mission, values and modernization efforts to an enthusiastic group of Airmen.

The surgeon general, tasked with leading Air Force health services, oversees all medical-related mission sets, to include advice and counsel to the Secretary of the Air Force and the Chief of Staff of the Air Force on matters regarding the health of Airmen.

During her visit, Hogg visited the 56th Medical Group and the Tactical Integrated Training and Nutrition Arena, a facility unique to Luke AFB, for an in-depth look into the human performance courses offered to ensure Air Force pilots are prepared and conditioned to handle the extreme tasks placed upon their bodies.

“Some of the highlights I’ve seen while on my visit here at the 56 MDG is the way they are going out into the operational community and taking care of Airman at that level as opposed to them having to come into the clinic,” said Hogg.

Thunderbolts attended a luncheon with Hogg and were given the opportunity to ask questions about their concerns in the medical field and how they could make a change for the better. 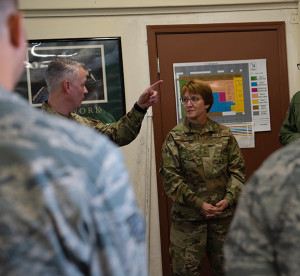 “The whole visit that I had has thoroughly impressed me with the innovation of our Airmen in the medical group,” said Hogg. “They’re not waiting for decisions or actions from me for them to change the way they do business. In every instance that I was able to engage with the Airmen, in the different clinic areas, they’re all coming up with ways to do business better.”

“The 56 MDG is unique in the Air Force due to the large fraction of patients seen daily that are retirees, which poses a challenge for our medical teams,” said Col. Daniel Lamar, 56th MDG commander.

“What makes Luke’s 56 MDG unique is the population that they serve,” said Hogg. “This is the largest fighter training population in all of the Air Force.”

Hogg’s visit to Luke showcased how Thunderbolts are not only changing the Air Force from the 56th Fighter Wing, but doing it at an extraordinary pace. Hogg said she plans on taking some of Luke’s innovations and implementing them at other bases as a staple of how the Air Force prepares and stays medically ready.