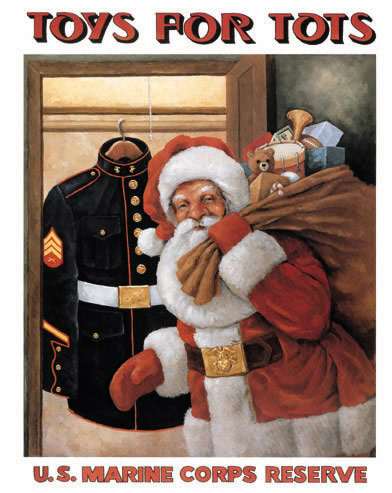 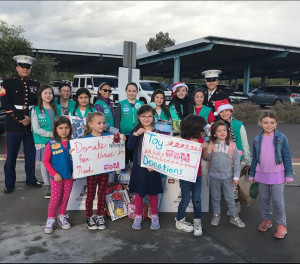 U.S. Marine Corps Reserve members stand with volunteers at a toy collection point in Phoenix, Ariz. Toys were gathered throughout the state from October to December, and will be distributed to more than 300 families now through Dec. 25, 2018.

Toys for Tots is a nationwide program run by the Marine Corps Reserve in which Marines conduct a toy collection and deliver, through a new toy at Christmas, a message of hope to less fortunate youngsters that will assist them in becoming responsible, productive, patriotic citizens.

”The primary goal of Marine Toys for Tots is, through the gift of a new toy, help bring the joy of the holidays and send a message of hope to America’s less fortunate children,” said U.S. Marine Corps Sgt. Ryan T. Hill, Toys for Tots coordinator.

Toys for Tots began in 1947 by U.S. Marine Maj. Bill Hendricks in Los Angeles as a community action program dedicated to providing Christmas toys to needy children throughout the nation. The program was expanded nationwide in 1948 and since then successful campaigns have been conducted each year and now occur in more than 400 communities. 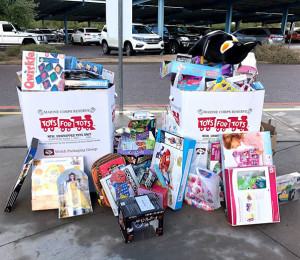 A collection of toys sit waiting to be sorted and prepared for distribution to families in need. Toys for Tots began in 1947 by U.S. Marine Maj. Bill Hendricks in Los Angeles as a community action program dedicated to providing Christmas toys to needy children throughout the nation.

“Toys for Tots is important because we help out people that are really struggling,” said Hill. “Without organizations like Toys for Tots this time of year could be extremely hard on some families.”

As the coordinator, Hill was given the responsibility of managing money and organizing the donations. Altogether, Hill and the multitude of volunteers helped provide over 300 families and 50 other non-profit organizations with toys for children.

“To me Toys for Tots means that many children can have a memorable Christmas and know that there are generous people out there that are willing to donate their time and sometimes money to ensure that this happens for them,” said Hill.

The dates for collection start October 1 and end December 15 every year with distribution starting at the end of November until Christmas Day. There are still plenty of opportunities to volunteer your time at the warehouse after the new year. Anyone wishing to volunteer should email LukeAirForceBaseT4T@usmc.mil to get involved.

For more information or if you wish to donate to the Phoenix Campaign, visit phoenix-az.toysfortots.org to make a monetary donation and locate your nearest Toys for Tots drop site.