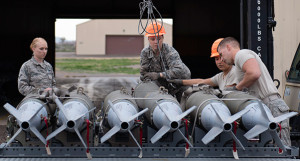 The roar of fighter jets zooming by is a familiar sound on Luke. They fill the sky with spectacles of weaving, winding and intricate maneuvers.

This breathtaking display can make it easy to forget about all the Airmen and hours that went into the aircraft maintenance which enabled it to fly.

There are many squadrons that perform countless hours of work in the background to make sure that Luke’s aircraft are performing to their optimal capacity. One such group is the 56th Equipment Maintenance Squadron at Luke Air Force Base, Ariz.

EMS is comprised of several flights, which include: AGE, Munition, Armament, Fabrication and Maintenance. Each flight plays a special role in either arming the aircraft, maintaining the equipment used on it or repairing the airframe.

“We’re behind the scenes doing a lot of work to help aircraft get into the air,” said Tech. Sgt. Eugene Lofton, 61st AGE noncommissioned officer in charge. 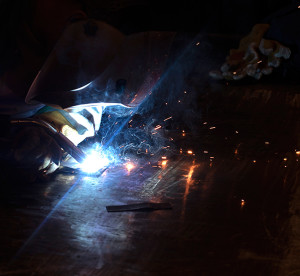 AGE is responsible for repairing and maintaining equipment on the flightline.

“Anything that’s on the flightline, besides the jets and the aircraft, we fix,” Blackwell said. “That’s the air conditioners, heaters, hydraulics, nitrogen – we have to be a jack of all trades.”

Also in EMS is the Maintenance flight.

“Maintenance’s primary function is nose to tail inspections,” Lofton said. “They’re charged with the inspection of the aircraft and the building up and tearing down all of the wheel sets.”

EMS also includes the Fabrication flight which insures the structural maintenance of airframes and the upkeep of equipment used to facilitate maintenance on the aircraft.

These shops collaborate and intertwine their specialized training to complete mission essential tasks.

“If there is a crack on the aircraft, a sheet metal technician will put a patch on it and a metals tech will come in and weld it,” said Lofton.

While some EMS flights maintain and repair, Munitions builds the ammo. 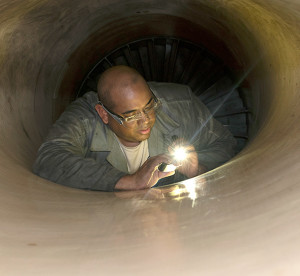 “[Munition] is responsible for building the munitions and delivering it to the aircraft,” Lofton said. “They place the fins on the bombs, tighten down the bolts, put in the fuse, put the tip of the bomb on and send it down the line.”

After the munitions are built EMS Armament flight takes over with the responsibility to load them onto the fighter jets.

The five flights that comprise EMS each perform a special role while sharing a common goal. There are many components and personnel that are essential to flight training and without the squadrons that work behind the scenes it would not be possible.

“We’re a big melting pot of mechanics working together to do different jobs for the same mission and that’s to train the world’s greatest fighter pilots,” said Lofton.

EOD: A job for the Air Force ‘s best and bravest