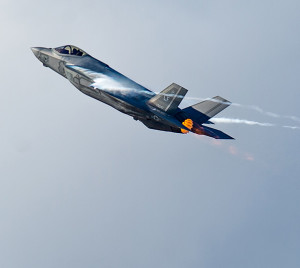 A total of 14 maneuvers make up the aerobatic performance, many which have never been seen by public audiences.

“The maneuvers showcase the full envelope of the F-35,” said Olson. “On the slow end, we’ll get down to less than 100 miles per hour of air speed, just barely hanging there but in complete control. Then on the high end, we’re going to take it up to just below the sound barrier for the high speed pass. We’re also going to be pulling up to 9Gs, nine times the force of gravity, and carving the jet into the air at huge angles of attack of more than 50 degrees.”

Some maneuvers in the demonstration include: -High Alpha Half Cuban -Weapons Bay Doors Pass -Minimum Radius Turn to High Alpha Loop -Pedal Turn -Square Loop -Slow Speed to Power Climb with a Split-S Reposition -Inverted to Inverted Roll -Tactical Pitch
Each air show demonstration is scheduled to last approximately 30 minutes. Half of the show will be spent performing jaw-dropping maneuvers and the other half performing the Heritage Flight profile with select vintage war planes.

Olson said that he does not have a favorite maneuver but spoke about the Pedal Turn with enthusiasm.

“When you watch the ground footage from the pedal turn, it’s almost unbelievable to witness what you’re seeing,” he said. “Any inverted maneuver, where you’re up-side-down at negative 1G and hanging from the straps in the seat, is a really fun maneuver to do. You’re seeing the world from a whole different perspective.”

Olson mentioned that hanging in the straps is not something often done in fighter aircraft, so seeing this one-of-a-kind performance is sure to be a spectacle. To achieve such a unique demo profile, he has been preparing in many ways.

“By the time it’s done, we’ll be at close to 30 training flights,” Olson said. “Countless hours in the simulator, academics on the ground before the first flight ever occurred and then after every training event there is careful analysis of the video from both the ground and in the cockpit.”

Viewing the videos after each flight has proven essential to this historic demo pilot’s training as he continues to refine his skills in the aircraft.

“I’m just a human trying to fly this thing as best as I can, making sure my mistakes are small, manageable and correctable every time,” Olson said. 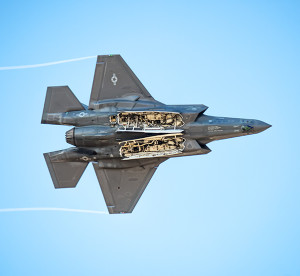 Capt. Andrew “Dojo” Olson, F-35 Demonstration Team pilot and commander performs a weapons bay doors pass during an F-35 Demo practice at Luke Air Force Base, Ariz., Jan. 16, 2019. Throughout the off-season, the F-35 Demo Team has been practicing and refining their new demonstration which will highlight the F-35A Lightning II’s full maneuvering capabilities.

And just as a lot of flying time is important to the training, the simple things are just as essential to a high-performance athlete like Olson.

He says getting in the gym, staying fit, eating right and getting plenty of sleep are just a few of the things he keeps in mind, saying the flight is a workout in-and-of-itself. “

Other demo teams may give you a sample of one or two of these maneuvers, but nowhere else will you see all of the best maneuvers on the planet combined into one epic demo,” said Olson. “There’s no filler in this flight. It’s a light the afterburner and rage for 30 minutes kind of show.”

The F-35 Demo Team is scheduled to perform at air shows across the country in 2019. During their historic inaugural season, Olson and the team of six maintainers and support personnel plan to interact with as many air show attendees as they can. So get your sunscreen out and earplugs in because 2019 is shaping up to be the most intense air show season ever.