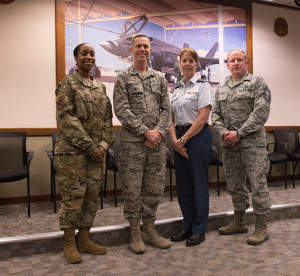 As home to the largest fighter wing in the world, Luke Air Force Base in Arizona often has the responsibility of sharing important practices and methods stemming from the innovation of our Airmen — both in and out of uniform.

Since Chief of Staff of the Air Force Gen. David L. Goldfein announced his initiative to revitalize squadrons, an assigned task force has been visiting bases and producing visible changes as part of an implementation plan.

According to the findings in the implementation plan, Col. Russell Williford, Director of the Revitalizing Squadrons Task Force, said there are three key attributes to a successful squadron: verifiable mission success, purposeful leadership and esprit de corps.

These key attributes are being implemented through three lines of effort: focus on the mission, strengthen leadership and culture, and take care of Airmen and their families.

“Luke is well-known for many different things,” Williford said. “The reputation of Luke across the Air Force is one that does community engagement and taking care of their people very well. The amount of community engagement and the Community Initiatives Team in particular is something that is unique to Luke. These programs have the ability to show what close community ties and ongoing communications can do in an area that has a dense population and a very important mission.”

Increasing pressures of urban development are a high priority on Luke leaders’ list of concerns. Luke is one of the few Air Force installations that has a dedicated office and staff, the CIT, to foster direct communication channels and build positive relationships with local authorities, community members and elected officials.

“Our trip to Luke was to initiate a dialogue with the wing and the folks who are performing these really important missions,” Williford said. “Coming here was a learning aspect to understand, with allies, how we can share practices affecting these programs. For our team in particular, seeing the best practices which Luke is performing in person, helps us use them to facilitate across the entire Air Force.”

Williford explained that Luke holds a robust status across the Air Force for the programs it has in place to continually improve the partnerships for Airmen and their families.

Col. Heather Thorne-Albright, RCAF family advocate, spent the day touring Luke with the task force to learn from and help improve similar programs in the RCAF. 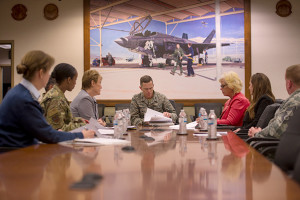 “Our countries are not that different in the challenges they face in terms of retention, recruiting and trying to find the proper work-life balance for our people,” Thorne-Albright said. “Luke has so many great ideas and people doing outstanding work in these community engagement and family support areas that they have here in their community. We hope to go back and see which of these ideas we can borrow to help our men and women and their families back in the RCAF.”

Having learned from the task force, Thorne-Albright realized that the policy implementation process was adapted for specific reasons.

“One of the best parts was that this isn’t just out-of-the-box thinking,” Thorne-Albright said. “This is a methodical approach with concrete surveys and data analysis. There wasn’t an expectation that we can change everything tomorrow. Instead of a Band-Aid fix, Luke has taken the time to get the data, do the homework and are completely invested and highly motivated into making these community programs successful.”

As the task force continues to work towards the revitalization of squadrons, they continue to learn from adaptive bases and teams of Airmen who are at the forefront of these initiatives, such as Luke.

“Discussing these challenges initiated a longer dialogue to learn from each other,” Williford said. “It was a natural synergy between all of us to come together and learn more about how to make the Air Force better.”

Ammo, maintenance and pilots: how a strike mission is accomplished