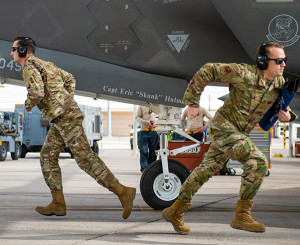 While the F-35A Lightning II Demonstration Team pilot and commander Capt. Andrew “Dojo” Olson has been hard at work refining the aerial maneuvers for their all-new demonstration, the maintainers have also been practicing their newly developed ground performance.

Tech. Sgt. Michael Couture, F-35 Demo Team maintenance lead, has spent the last few months designing the new ground performance which will be featured at 16 air shows across the United States and Canada this season.

“During the previous years as the F-35 Heritage Flight Team, the ground performance was a little slower paced with a lot of marching and facing movements,” said Couture. “This year, our goal is to speed things up and bring the energy the audience sees in the air to the ground show.”

The new ground performance not only brings more excitement to fans but also prepares the jet for flight.

“During the ground performance, you can expect to see our ground crew hustling around the aircraft completing maintenance inspections and final checks to prepare for the flight,” said Couture. “Executing clean and crisp facing movements during these checks showcases the pride and professionalism of our team as well as the U.S. Air Force.” 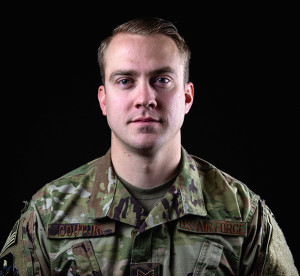 The team will dedicate an entire week in February to perfecting the new ground procedures in preparation for final certification during the Heritage Flight and Certification Course at Davis–Monthan Air Force Base, Arizona.

Couture spoke enthusiastically about his team and the upcoming air show season.

“Everyone on the team is an excellent maintainers and are truly the best of the best,” said Couture. “I can’t wait to get the season started.”

As a second-year member on the team, he has grown to love certain aspects.

“My favorite part about being on the team is traveling to all of the awesome places and having the opportunity to interact with all of the fans,” Couture said. “I love seeing how excited they get when they see the F-35 fly for the first time.”

For more information on the F-35 Demo Team, follow them on social media or their website at https://www.luke.af.mil/F-35-Demo-Team/.

Help offered for state of mind