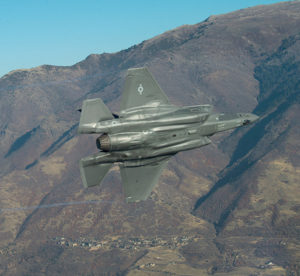 An F-35 Lightning II stationed at Hill Air Force Base performs aerial maneuvers during a combat power exercise over Hill Air Force Base, Nov. 19, 2018. The exercise aims to confirm their ability to quickly employ a large force of jets against air and ground targets, and demonstrate the readiness and lethality of the F-35A. As the first combat-ready F-35 unit in the Air Force, the 388th and 419th FW are ready to deploy anywhere in the world at a moment’s notice.

The 2018 Luke [Air Force Base, Ariz.] initiative to increase F-35A Lightning II maintenance efficiency through the creation of a team of unified maintenance specialties called Lightning Integrated Technicians has expanded to all 120 62nd Aircraft Maintenance Unit Airmen and maintenance on 15 F-35As.

“Since the summer of 2018, we’ve scaled the program from four aircraft to 15, encompassing 120 maintainers in our maintenance unit,” said Master Sgt. Jason Troxell, 62nd AMU LIT project officer. “We’ve also chosen two of our maintainers to be training expediters. Their full time job is to match technicians with available work based on their training needs.”

Senior enlisted members initially created a 1,225-task Career Field Education Training Plans, consisting of all core tasks derived from the four included career fields. Leadership has consolidated these tasks to a 258-task CFETP and a total job listing of approximately 900 core maintenance procedures that the LIT members should be able to perform.

In the past, sections performed career-specific tasks with minimal coordination with other sections, however, LIT team members work consistently on the same jet, making it easier for them to track and plan all maintenance performed.

“One of the biggest challenges pilots face is continuity of operations. Whether it’s a stable turn pattern, predictably reliable aircraft, or upcoming training phases—our success depends on the trust that our maintainers deliver safe and operational aircraft,” said Lt. Col. Peter Lee, 62nd Fighter Squadron commander. “The LIT concept has helped our maintainers see the continuity of the jet they’re assigned to not just as a dedicated crew chief, but as a team responsible for that jet.”

Through this program the LIT team has trained the first ever LO technician as a dedicated crew chief, along with 5 avionics technicians.
According to Troxell, now that the 62nd AMU is entirely comprised of LIT teams, the Air Force is given a better numeric representation of what average AMU production will be should the program be employed Air Force wide. The LIT program model, along with other similar models being tested at other bases across the Air Force, provide the way forward for progressive and increasingly efficient aircraft maintenance.

“We expect a lot of these young maintainers,” said Lee. “The pilots see them stepping up to the challenge, and we try to make sure the team responsible for that jet also understands how they fit into the mission we fly every day. We are proud to be a part of the AMU team, and redefine what effective and safe operations look like.”

We are leaders and work best in teams

Around Luke– Reading is fun…