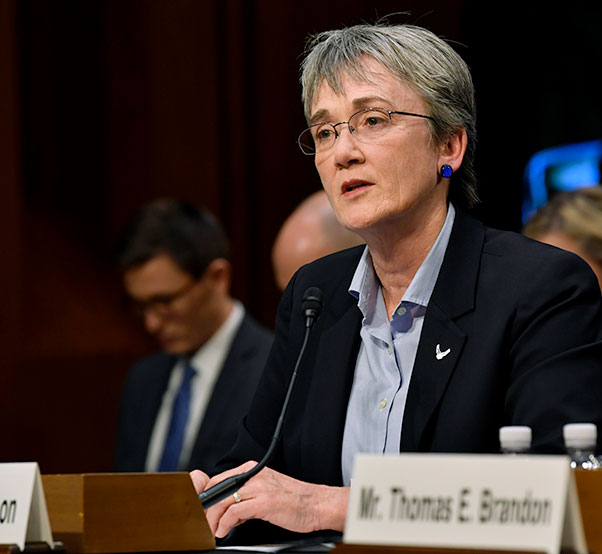 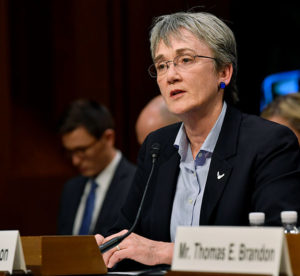 Upon a favorable final vote by the regents, Secretary of the Air Force Heather Wilson announced her resignation March 8, after serving in her position as the service’s top civilian since May 2017, to accept the role as president of the University of Texas at El Paso.

Wilson will continue to serve as the 24th Secretary of the Air Force until May 2019.

“It has been a privilege to serve our Airmen over the past two years,” said Wilson in her letter of resignation to the President of the United States. “I am proud of the progress we have made to restore our nation’s defense.”

During her service, Wilson has been responsible for the affairs of the Department of the Air Force, including organizing, training and equipping and providing for the welfare of all active-duty, Guard, Reserve and civilian forces as well as their families.

Moreover, she has been leading the way in improving the lethality and readiness of the Air Force. What was once 660,000 total force in 2017 is now 685,000 total force today – a 15 percent increase.

“We hit the lottery with Secretary Wilson,” said Air Force Chief of Staff Gen. David L. Goldfein. “Under her leadership, we became a better U.S. Air Force and our Airmen will continue rowing hard, becoming even faster, smarter. As she takes her talent and leadership to my home state of Texas, I wish her the very best.”

Prior to assuming the secretary of the Air Force position, Wilson was president of the South Dakota School of Mines and Technology, a member of the U.S. House of Representatives, a member of the National Security Council staff and also served in the private sector.

“My greatest appreciation and thanks to Secretary Wilson for her premier leadership of the world’s greatest Airmen and Air Force,” said Under Secretary of the Air Force Matthew P. Donovan. “We wish her the best at the University of Texas El Paso.”